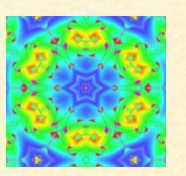 At first this may not seem to apply to astrology, after all we are a spiritual science, not some storefront fortuneteller. I know when I first started doing readings, people would ask me, "are you psychic?" and I would say, "No this is a science, I am just reading the chart." But then I realized that while we de-emphasize the individual "psychic abilities" or intuition of the astrologer in traditional astrology, that it nevertheless plays a key role.

The very first aphorism of the Centiloquium traditionally attributed to Ptolemy, aka the Liber Fructus, says,

1. A Te & Scientia; from thyself and learning: for it cannot be, that he who is skilful should pronounce particular forms of things; nor can the fancy undertake a particular, but general notion of the sensible matter; in such things we must use conjecture. None but those endued with Divine Inspiration predict particulars.

In other words, you can get about 75-80% of the information for a reading from the chart and from applying traditional technique, but to get 100% involves tuning into the situation. I remember that when I did my Chandra Levy event charts which turned out to be highly accurate, I kept seeing people on the street and seeing their heads as skulls for about a week. And indeed Chandra was dead!

There is a tendency, particularly among modern astrologers, to see astrology as somehow acceptably "scientific" as opposed to other forms of divination which are "psychic" and ultimately illegitimate, similarly to their views of magic! Cornelius Agrippa, for one, would not have agreed with them. He lists all sorts of different forms of divination in Three Books of Occult Philosophy and explains why they work. For example,

"Chap. liii. That no Divination without Astrology is perfect.

We have spoken in the foregoing Chapters of the divers kindes of Divinations: But this is to be noted that all these require the use and rules of Astrology, as a key most necessary for the knowledge of all secrets; and that all kinds of Divinations whatsoever have their root and foundation in Astrologie so, as that without it they are of little or no use; yet Astrological Divination, in as much as the Celestials are causes and signs of all those things which are, and are done in these inferiors, doth give most certain demonstrations by the situation, and motion onely of Celestial bodies, of those things which are occult or future; of which we shall in this place speak no further, since of this Science huge Volums have been wrote by the Ancients, and are everywhere extant. Therefore whether the Physiognomists look upon the body, or countenance of forehead, or hand, or the Soothsayer, searcheth by dreams or Auspicia, that the judgment may be right, the figure of heaven is also to be enquired into. From the judgements whereof, together with conjectures of similitudes and signs, are produced true opinions of the significators."

While Agrippa gives precedence to astrology, he accepts the accuracy and value of many different types of divination all of which depend on the spiritual sympathy and interconnection of all things for their ability to predict. And indeed this is a key part of Hermetic and Neoplatonic thought. Plotinus, the great 3rd century Neoplatonic philosopher in his Ennead II, treatise 3, "On Whether the Stars are Causes", says,

"There would be no signifying if particular things did not happen according to some order. Let us suppose that the stars are like characters always being written on the heavens or written once for all and moving as they perform their task, a different one: and let us assume that their significance results from this, just as because of the one principle in a single living being, by studying one member we can learn something about a different one. For instance we can come to conclusions about someone's character and also about the dangers that beset him and the precautions to be taken by looking at his eyes or some other part of his body. Yes they are members and so are we; so we can learn about one from the other. All things are full of signs, and it is a wise man who can learn about one thing from another...Then what is this single linked order? If there is one, our auguries from birds and other living creatures, by which we predict particular events are reasonable. All thing must be joined to one another; not only must there be in each individual part what is called a single united breath of life, but before them all and still more, in the All. One principle must make the universe a single complex living creature..."

By doing divination, we are, in fact, involving ourselves, connecting ourselves spiritually to the patterns and situations we seek to predict. I, for one, find doing readings very tiring. First, because reading these patterns is not easy, but also, I am realizing, because of the heavy emotional and spiritual weight of many of the situations I am dealing with. I need to start thinking more about spiritual cleansing!
Posted by Christopher Warnock, Esq at 12:23 PM 1 comment:

What are the Effects of Talismans? 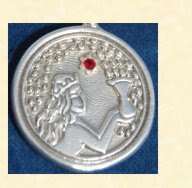 I recently had a question about the effects of some of the pentacles from the Greater Key of Solomon, which led into a discussion of the effects of talismans in general.

In terms of the effects of the pentacles frankly I have to question whether some of them literally work. For example, the Fifth Pentacle of the Sun, "serveth to invoke those spirits who can transport thee from one place unto another, over a long distance and in short time." I've sold these, but I haven't had anyone come back and say they were instantly zipping across country. On the other hand, it would make sense if you found that you were moving through airport security easily with a 5th Sun pentacle, and your trips seem to go faster.

Similarly with the the Third Pentacle of Venus, "...this if it only shown unto any person serveth to attract love. The Fifth Pentacle of Venus, "When it it only showed unto any person whatsoever inciteth and exciteth wonderfully unto love." Not sure that this would instantly cause someone to fall under your sway, more typical effects from Venus and love talisman in general are all of a sudden getting calls and contacts by ex-boy/girl friends or out of the blue calls from people you are interested in romantically, finding it easier to socialize, having attractive people more attracted to you.

I often have to say to people, "this isn't like the movies, lightning bolts aren't going to come out of your fingertips if you get a talisman" On the other hand, magic works! I've said magic is the art of creating coincidences and very often the spiritual works through these rearrangements of the material world. All of a sudden after working with the Pleiades mage talisman
and Alkaid talisman, which being a circumpolar star has to do with guidance as well as protection, I began stumbling on to this hidden esoteric lore, eg in one week I discovered a Pleiades invocation in the Greek Magical Papyri and 36 ancient decan sigils.

My experience with wealth talismans is that big bags of gold don't start materializing out of thin air and you don't get a talisman and next day win the Powerball, instead they give you more opportunities to make money and start drawing in money faster. With any talisman, you need to be willing to do some practical footwork and give the magic a chance to work in your life. For myself, when I work with wealth talismans, I can see more customers calling and more orders coming in.

But we don't want to be entirely focused on immediate, tangible material effects of talismans. This focus is understandable, given the Modern World view which says that nothing really exists except matter and energy. In the traditional world view the material is underlain by the spiritual, the spiritual provides the ultimate patterning for the arrangement of the material world and is more perfect and in fact a higher level of reality. By working with these underlying spiritual connections and sympathies we can cause change in the material world, but it may, in fact, be more significant that we can work with the spiritual, in the world and within ourselves. Seeing that the spiritual actually exists is ultimately of greater value. In addition, we shouldn't downplay the power of magic on a purely spiritual level, what moderns would consider an internal psychological level, but also in terms of theurgy, using magic as a spiritual path.
Posted by Christopher Warnock, Esq at 9:09 AM No comments: