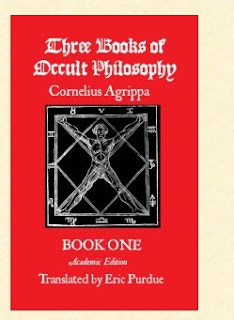 Picatrix is the only rival to Three Books of Occult Philosophy and where Agrippa omits some details of magic ritual and is not so focused on astrological magic as Picatrix, he more than makes up for it with his systematic exposition of how magic and astrology works. The three books of TBOP correspond to the three worlds, Material, Celestial/Imaginal and Divine/Archetypal/Angelic. If you understood Agrippa, you would truly be a mage!

Agrippa wrote TBOP in Latin in 1533 and so far we've had to get by with the 17th century JF translation. It's spotty, has mistakes and JF, (whoever he was) was weak on astrology. Tyson did his best with the Llewellyn version, but he didn't read Latin and didn't know traditional astrology. Frankly I basically ignore all of Tyson's comments on astrology they will lead you astray, except for really basic stuff like which star the text is referring to.

There is, however, a modern Latin critical edition. This is very expensive, over $200, and you need to be able to read Latin to use it. It is very useful, however, because the editor carefully looked at all the different versions of Agrippa and came up with the most accurate one possible.

Now Eric Purdue has come along and translated the Latin critical edition, so we finally have a true modern translation! Obviously it's going to be similar to the JF translation, but it is surprising how much JF and Tyson missed or misunderstood. This edition, which we are calling the Academic Edition, tries to be as literal a translation as possible, while still using modern English. Plus it is extensively sourced and has over 1,000 footnotes! This is Agrippa as close to the original as possible.

Now we are starting with Book One, which deals with the Material World, with occult virtues of natural things and natural magic. Very key part of magic, very important section of TBOP. We do hope to finish the complete TBOP and I can understand how readers might say, "oh, I'll just wait for the complete version to come out" Couple of things. First, TBOP is not translating itself, and there is not some big team of paid translators beavering away. Eric is doing this on his own time, with no guarantee of remuneration. The complete version may never come out! It is also going to take a long time, I would not expect to have Books 2 & 3 finished until late into 2013. Finally, by buying the individual volumes you support the ongoing translation effort as well as the translator and Renaissance Astrology. We are not government funded and not amateurs, we aim to continue to bring professional skill and professional quality translations to the contemporary esoteric community. Plus buy now and you get it NOW!

So, for the next 8-10 weeks, the new modern translation of TBOP Book One will be available just from the Renaissance Astrology website and for just $19.95 plus shipping. Once it shows up on Amazon, the price will be $24.95.