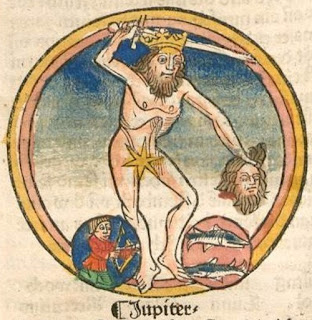 This is the second post on the astral religion of the Harranian Sabians as exemplified in Picatrix.

As I've mentioned I am finding myself pulled towards this more devotional approach, as opposed to regarding the talismans as essentially empty mechanisms or the spirits as existing to fulfill my personal desires.

Of course we can immediately see that even Picatrix lends itself somewhat to this approach because the rituals enumerated are focused on petitions, ie asking for specific goals. This is not the "wrong" approach, but it is useful to recognize the underlying astral religion and the possibility of taking a stance towards the spirits that venerates them and is part of a spiritual path.

In addition, by looking carefully at Picatrix we can enhance the power and effect of our ritual and talismanic work.

"How to speak with Saturn. When you want to speak with Saturn and ask him for whatever you wish, you must wait until he enters into good condition, of which the best is when he is in Libra, which is his exaltation, next in Aquarius, which is the house of his rejoicing, and last in Capricorn, which is his second house. If you cannot have him in any of these three places, put him in one of his terms or triplicities or in an oriental angular or succeedent house (among all of which the angle of the midheaven is to be preferred), direct in his course, and in a masculine quarter, being oriental as mentioned above. Beware of his detriment and unfortunate aspects, of which the worst of all is a square aspect with Mars, and do not let him be cadent."

This passage is interesting because it directly contradicts the tendency to ignore astrological conditions when doing planetary or other celestial ritual. I know that this is a sore point with some contemporary magicians who insist they can do a planetary ritual whenever it suits them. My point would be again that this is not "wrong" but I can't help but believe that the power of planetary ritual would be enhanced if properly timed.

The next section is particularly interesting,

"The most important point (of which you should take diligent care) is that you should see that the planet is in good condition and quality, and remote from infortunes, because when he is like this, he is like a man of good will and a lively heart and a great and ample mind, and if another person seeks something from him, he cannot find it in himself to deny the petitioner. When the same planet is retrograde in his course or cadent from the angles, he is like a man full of anger and ill will, who is most ready to deny a petition."

I like the approach here very much. The planets are shown as having personalities. One has a relationship with them. The planets are not employees or some celestial Amazon.com that you can simply log in to 24 hours a day seven days a week and insist on immediate service and expedited shipping. The planets have moods, they are happy sometimes and cranky, weak and even feeling sickly other times. We can see how they are feeling by their astrological condition.

Again this approach conditions our ritual and talisman creation timing. We wish to be polite to these powerful being, we show respect to them by contacting them at appropriate times, when they are most ready to receive us and most ready to accede to a request.

As I've said, this is only one possible approach, we can see the Solomonic grimoires take a much more threatening and commanding approach. Even in the Renaissance, this approach was more popular. Nevertheless, Picatrix directly points to the possibility of a more devotional approach. I feel more comfortable with it and I can also attest that I have been the recipient of an incredible number of celestial gifts, both material and spiritual.

Posted by Christopher Warnock, Esq at 11:37 AM No comments: 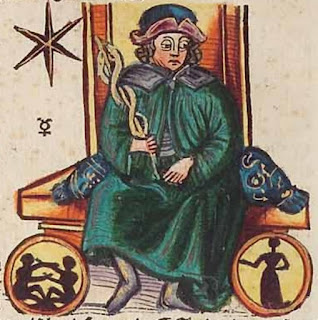 Picatrix, while being a compilation of a wide variety of magical, religious and astrological practice, is heavily reliant on the celestial religion and magic of the Harranian Sabians.

The Harranians, whose antecedents and actual practice are mysterious, appear to be pagans, who survived into the Middle Ages under the Christians and then Muslims. While preserving indigenous beliefs and practices, they also venerated the stars and planets.

While Agrippa included summaries of many astrological talisman recipes from Picatrix, what he generally left out were the celestial rituals necessary to invoke the spirits of the stars and planets and to consecrate talismans. The most prominent example of the rituals and ritual practice of the Harranian Sabians is found in Book III, chapter 7 of Picatrix.

When we return to these recitations of the rituals and invocations of the Harranians, we see that while they can be used as petition for things or events desired, that they are at their root, religious and an expression of devotion to the celestial spirits.

Here are the introductory instructions,

"When you desire to speak with any planet or ask it for anything that you need, first and above all else, purify your will and your faith in God, and beware especially that you believe in no other; then cleanse your body and your garments of all dirt. Then determine the nature of the planet to which your petition corresponds. When you wish to address the planet to which your petition properly belongs, dress in clothing dyed the color of that planet, and suffumigate yourself with its suffumigation, and pray its prayer. Do all this when the planet is established in its dignities and called superior in its dispositions, for by observing these things, what you desire will come to pass."

Note that these instructions are for when you wish to speak with the planets OR ask them for something. It's a good idea to build up a positive relationship as opposed to just invoking them when you want something. The religious aspects are indicated by the need for both physical and spirituality purity. This is very common, in Shinto practice, there is always a chizuya, or water purification font, at the entrance to a shrine so you can wash your hands. See Chizuya.

Next, if you are asking for something you need to figure out what planet rules that thing. No use in asking Saturn for love!

Then the basic ceremonial preparation. One classic Harranian method is to wear appropriate clothing, in particular to wear the color associated with the planet. These can be widely variant, but often Saturn is black;Jupiter blue, green or purple, Mars, red; Sun yellow, orange or saffron, Venus, white, green, pink; Mercury, mixed colors; Moon, white or silver.

Then the suffumigation, this is appropriate incense. Again there are many different planetary incenses. If possible, however, it is important to use some kind of incense. If you have respiratory problems, you can pass on it, but even though I am sensitive I still use a very small amount.

Finally, and this is key for astral religion and astrological magic, we invoke the planets at an appropriate time. Planetary days and hours appear in the Greek Magical Papyri, but the Harranians appear to have been the most sophisticated users of electional astrology for magic and religion, timing their rituals and talisman making with full chart elections.

Kamidana: A Devotional Approach to the Astrological Spirits 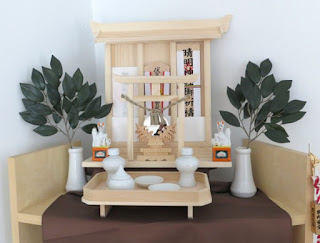 Much magic, both traditional and modern, is of the "Hurry up and give me X, Y or Z?" variety.

Certainly in the Solomanic and Goetic grimoires the magician never flinched from ordering the spirits to show up pronto and give him what he wanted. I can't say this is untraditional nor can I really condemn the approach, but I've increasingly been pulled towards a more devotional approach to the celestial spirits.

Partly this comes from the approach of Picatrix. In fact the most detailed planetary invocations found at Bk III, chapter 7 of Picatrix are explicitly said to be from the astral religion of the Sabians of Harran. There's a certain amount of asking for specific stuff, but not much "get going" instead there's a lot more listing of the attributes of the spirits and being respectful and complimentary.

I've also been quite influenced by my immersion in Japanese culture, first through Zen and then through frequent trips to Japan. This year I decided to put together a kamidana, which is a small household Shinto shrine. You can see more about my kamidana.

In Japanese practice, you can definitely ask for stuff and both Shinto shrines and Buddhist temples have talismans. But there's very little coercion here and a lot more respect and devotion. I certainly wouldn't say it's the only way, but I can tell that this is the way I'm drawn to.