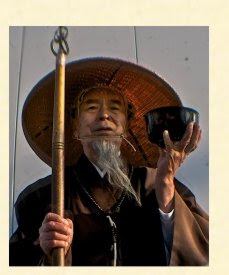 I will be away from Friday October 21st to Tuesday, October 25, 2011 for a sesshin (intensive meditation) at Ryumonji Zen Monastery At the sesshin I am scheduled for my Jukai/lay ordination.

I haven't said too much about my Zen Buddhist practice, but I thought it might be useful to talk about it a little. We live about 1/2 a block from the Iowa City Zen Center, very convenient! Since we were so close, we thought, "clearly a sign!" and started attending zazen.

This particular Zen center is affiliated with Shoken at Ryumonji Monastery. Shoken is a dharma heir of Dainan Katagiri in the Soto Zen School.

Ok, what does that mean? Buddhism arose in India and passed to Southeast Asia, China, Korea and Japan. In the middle ages in China the Chan (Chinese for dhyana or meditation) School arose as reform movement within the Chinese schools and lineages. It passed to Japan as Zen. In Japan there are 3 schools of Zen, Rinzai, Obaku and Soto. Over simplifying Rinzai focuses on koans, impenetrable statements like the classic "what is the sound of one hand clapping?" while Soto is very focused on zazen, sitting meditation. Rinzai does zazen, of course and Soto can use koans. Obaku is a later import of the Chinese Rinzai lineage. Here's a little taste of Zen from the Matrix.

Unlike many Western spiritual traditions Zen has an unbroken tradition and lineage. I can read Dogen (the "founder" of Soto Zen) and he is describing the ritual and teachings that my teachers tell me.

I have done zazen (sitting meditation) every day now for a year. Up till last year I found it impossible to meditate at all. I could not even sit still. Now I am doing an hour a day. At sesshin we do about 15 hours of meditation over 2 1/2 days and a full day. At Rohatsu, an 8 day meditation session, they traditionally stay up later and later each night and all night meditating on the last day. I don't think I am quite up to that yet.

The meditation has had clear positive effects. For example, I am much calmer and less likely to react immediately emotionally. This is not the main point, however. I am convinced that the accounts of kensho and other enlightenment experiences are correct and that they can be obtained through Zen and other spiritual traditions.

Now, what does this have to do with astrology and magic? First, my Zen teachers have been very supportive of my astrological work. Zen, to Americans, seems like an atheistic/materialist iconoclastic spiritual tradition, easy to fit into their modern ego based consumer lifestyle. It is, in fact, very ritualized and does a good amount of what can only be described as magical ritual and invocation. This is
just not as major a focus as it would be in Shingon or other Vajrayana/Tantric Buddhist schools.

Secondly, there is a long tradition of syncretizing local spirits and native spiritual cultural elements into Buddhism and Zen. The Hindu devas, Chinese Taoist immortals, and Japanese Shinto kami were blended into Buddhism. The stars and planets are already part of Chinese & Japanese Buddhist practice, so my adding in the Western style astrological spirits, basically as dharma protectors and cosmic gods, is not much of a stretch.

And why do I want to integrate them at all, doesn't astrological magic stand on its own? I've found astrology and astrological magic useful from a practical standpoint, after all it is great to be able to accurately predict the future and to do practical magical tasks. But the most valuable quality of practicing traditional astrology and magic is that it confirms for moderns, steeped in atheistic/materialism, that the spiritual exists. Once we know that then following a spiritual path and affirming the primacy of the spiritual over the material becomes logical and, for some, inescapable.

I'm pleased that I have found a living spiritual tradition that allows me to continue my practical studies and work in astrology and magic, but points me to a path leading beyond the material, beyond merely attempting to sate the ego self.
Posted by Christopher Warnock, Esq at 11:02 AM 1 comment: 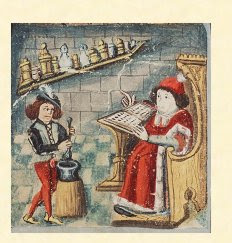 I have Saturn in Aquarius rising, so it is probably no surprise to traditional astrologers, at least, that I am a rock ribbed traditionalist, albeit with some unconventional leanings. A modern astrologer would likely expect me to be a dancing hippie. And I have say this song does give me a lump in my throat and I have long hair. But then mix that in with being a lawyer!

Aquarius has a quality of being unconventional, but since it is ruled by Saturn, that unconventionality expresses itself as a deep traditionalism.

One area that I can see this clearly is in the teacher/student relationship or more traditionally the master/disciple relationship. Immediately the modern hackles rise! In two areas, first, the modern archetype of equality and the fact that some teachers make abusive use of the relationship.

For moderns the advances in political equality, one of the few real achievements of the Enlightenment, have extended to all areas. We are all equally qualified, apparently to pilot a 747 or do heart surgery.

The reality of the lack of knowledge of the student is rationalized with equality by treating the teacher as a functionary or employee with some bits and bobbles of useful knowledge that the student can quickly pry out and appropriate. Certainly it makes no sense to follow the teacher’s curriculum or lesson plan. You already know 99% of what you need to know, just ask a few questions, follow your own [lack of] knowledge, after all, who does this dude think he is? Also since you and the teacher are on the same level, feel free to criticize the teacher and argue with them. You have a right to your own opinion and that opinion is just as valid as the teacher’s, in fact, probably more so since you wouldn’t have an opinion that you knew was wrong. If you disagree with the teacher their job is to convince you, in fact they should cater to and serve you.

One problem with this modern automatic assumption of equality or even superiority of the student is that it interferes with learning and on a deeper level, it is a profound misunderstanding of the respective roles of teacher and student.

At its most basic, the student must realize that they lack knowledge and recognize that the teacher has this knowledge. They must be willing to learn.

The teacher must have the knowledge that the student seeks and be willing and able to teach it.

Both of these are honorable roles, but logic as well as the traditional view both dictate that the teacher is superior to the student in knowledge.

It follows that not only is the teacher superior in the knowledge sought itself, but also in knowing the method to impart knowledge.

Therefore the student needs to submit to the teacher’s method as well as open themselves to the information that the teacher imparts. Openly acknowledging this submission is painful and often unacceptable for the modern student.

Of course, this is not granting absolute power to the teacher. The student should investigate the teacher beforehand, checking out their training, their lineage and their teachers, reading their writings, talking with their students. But once the student decides to study with the teacher they should accept them wholeheartedly as their teacher. That doesn’t mean that they should let themselves be taken advantage of by the teacher and sadly some teachers have abused their students financially, sexually and in other ways. The student, as well as the teacher, always retain the right to end the relationship.

In my view, respect is at the core of the student/teacher or master/disciple relationship. If a student disrespects their teacher, they show that they do not value the knowledge that the teacher is giving them and ultimately, lack self respect.

I have been blessed with excellent teachers and as a student never felt inhibited about traditional ritualized forms of respect. For example, when I studied with Mehdi-Hairi Yazdi, an Iranian ayatollah, we all stood when he entered the room. As a Buddhist when I do dokusan, an individual interview with Shoken, my Buddhist teacher, I do three full prostrations to begin. I enjoy showing respect and in fact, feel ennobled to be part of these ancient lineages.

I don’t expect my astrology students to do prostrations, but in order for me to teach and pass on the tradition, I do need them to trust me enough not to be constantly looking for mistakes or arguing with me. It is hard enough to grasp this material without fighting me all the way.

When I teach it is not factory style mass production lectures with multiple choice testing in the educational/industrial complex, but the traditional method of one on one, albeit via the Internet or phone.

The traditional method works, I’m living proof of that. It is not that I am better than my students, just more knowledgeable. Besides, I was once a student and my students will be teachers. This knowledge is not mine, I am merely the conduit for passing on the tradition. Respect to the teacher is really respect to the lineage of teachers before them and ultimately to the knowledge itself.
Posted by Christopher Warnock, Esq at 2:33 PM 1 comment: