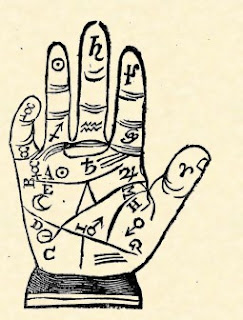 I had a recent question asking about rectification, which supposedly is a way for an astrologer to find your birth time if you don't know it so you can have a natal chart and have it read.

Ok, if we look at Christian Astrology, pages 507-519, where Lilly discusses rectification, frankly my eyes glaze over. A series of complex calculations in 17th century English are required.

However what is reasonably clear is that Lilly is seeking to rectify by going backwards, ie he looks at "accidents" basically significant incidents in the native's life and then uses that to try and reconstruct their birth chart. The basic method, which he mentions repeatedly is directions, ie primary directions.

This is a key traditional natal timing technique, which has been simplified as a degree for a year, or a day for a year, but in fact involves taking the 2-D chart and using spherical trigonometry, remapping the chart to the Heavens and then using complex calculations to mathematically see the path of the planets. This is then used, along with solar revolutions (returns) profections, and transits to do timing from a natal chart, or in this case rectification.

Frankly, I've never been able to understand primary directions or even figure out how to use software that has them. I know that many astrologers are excited about them and that's great, I've just never seen anyone convincingly look at multiple unknown natal charts and accurately time multiple life events with primary directions. Lilly certainly claimed to be able to do it, but I can't follow his methods sufficiently to check. It may be possible, all I can say is I can't do it and I don't know anyone who can.

Ditto with rectification, again it may be possible, but I personally can't do it and don't know anyone who can accurately. It's very easy to fool ourselves here, because if we know the outcome or know the life history of the person involved we can fit it into almost any chart and convince ourselves that we are doing prediction.

What I find is that horary which is very focused and precise compared to natal because it is dealing with such a limited question, still cannot time very accurately. Either the indications aren't in the chart or often they aren't accurate. Natal charts have almost no timing indications in them, if we just look at the basic chart, we have to use additional techniques like primary directions, firdaria, profections, solar revolutions and the modern favorite, transits. Given the broader strokes of the natal chart which is your chart when you are 2 and when you are 90, obviously the amount of detail and precision must be much less than a horary. So if precise horary timing is tough, natal must be even more difficult.

And this is for traditional astrological technique! Modern doesn't have a hope. Modern astrologers try to time off of just transits and solar returns(revolutions), plus they don't use essential dignities. Transiting Jupiter in fall with Jupiter in detriment in the natal chart is not likely to be very positive for the native, but a modern astrologer would be saying, "money, success, YEEEEH!"

So, it would be very nice to see someone make traditional rectification their life's work. They would need to master basic traditional natal technique, then master the natal timing techniques including primary directions, then master rectification. Then do about 500 unknown charts and be able to consistently accurate predict without knowing the native or their life history. If someone does do this, I will be happy to be their student!

Posted by Christopher Warnock, Esq at 11:10 AM No comments: