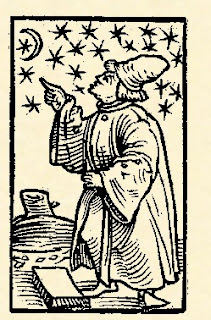 Posted by Christopher Warnock, Esq at 9:22 AM No comments:

I wanted to talk a bit about essential dignity scoring of talismans. As you look at talismans on my website you can see that they have different point values. These come from adding up the essential dignity scores for the planet at the sign or degree it was at when the talisman was made. Sign = +5, exaltation +4, triplicity +3, term +2, face +1. It is possible to have multiple dignities and thus to get greater than +5. For example we have a new Mercury +10 talisman. Mercury is dignified by sign +5, exaltation +4 and face +1, for a total of +10.

It does sound very impressive to have this Mercury +10 because we have multiple essential dignities and it does indeed boost the strength a bit. However, just looking at the essential dignity score alone is too simplistic, particularly when I've had clients turn up their nose at talismans and say, "I won't take less than +10" The problem here is that for many planets it is impossible for them to have +10. The Sun, for example, we have trouble getting less than +7 and it's basically impossible to get more than +8. Refusing anything other than a +10 Sun talisman means no Sun talisman at all!

Secondly, the scale of the points doesn't reflect their effectiveness accurately. (face) +1 is very weak, almost not worth doing. (triplicity) +3 is actually pretty good. +4 (exaltation) is all you ever need in a talisman. +8 on the other hand, is stronger, but is not twice as good as +4.

This is because we are not charging batteries, what we are doing is trying to contact and keep a good relationship with the spirit of the talisman. The power of the talisman is more like the quality of a phone connection. +1 and you have a super staticky line you can't hardly hear the other person. By the time you get to +4, this is like a good cell connection, no problem for a conversation. +8 is like using a T3 line for a phone call, maybe even overkill.

So, while it is nice to say Wow! +10! and yes, it's good, exaltation (+4) is really all you need for an excellent talisman. It is nice to have the extra points, and worth the extra effort to make them and the cost, but refusing a talisman because it is JUST dignified by sign or exaltation, is like telling your friends you won't talk on a cell phone, you only use a T3 line!

Posted by Christopher Warnock, Esq at 8:33 AM No comments: