These are Talismans not Jewelry: Switching to Bronze 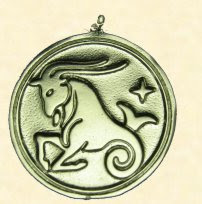 When we first started casting talismans at Renaissance Astrology, we used to occasionally cast in gold, but the price quickly became stratospheric. Ok, we'll use silver. But we've had to slow down our castings drastically in 2011 because of the tremendous increase in the cost of silver. When we started casting silver was $8 an ounce, it reached over $40 this year. Because we need to make multiple talismans at once and then wait to sell them, the cost of casting had become prohibitive. So, after much thought we have decided to switch to bronze as our main talisman metal.

I still occasionally get people that ask for a custom "pure" gold talisman, thinking that it is going to be $25 or maybe $50. The gold itself would be over $1500 and the cost of molds, casting, design, puts a gold talisman somewhere in the $4000-$5000 range. Plus you can't easily cast 24 karat gold, it tends to get blobby, sticky and won't pour smoothly.

The whole "custom talisman" thing is problematic. While custom talismans sound cool, they end up being about 10 times as expensive and a lot weaker than our standard talismans. This is because we sometimes have to wait years for the perfect time to cast standard talismans and casting a custom talisman costs a lot. Also currently even if you wanted to pay $2000 and the right time was available we have no open slots in our casting schedule for custom talismans. I tell clients, If you are interested in a talisman, definitely go for the standard ones, they are super powerful and the price is right!

Here's the key problem, basically people are approaching talismans as jewelry, not as objects of magical power. Jewelry adorns you, it is an expression of your personality, it shows your wealth, your taste, it is YOURS. Clients get obsessed with the appearance of talismans, worry about miniscule pits or blemishes (inevitable with hand casting) or get hung up about whether to replace the cord with a chain.

And want a solid tin Jupiter talisman (tin is too brittle and lightweight for a talisman) or a lead Saturn talisman (toxic) or a mercury Mercury talisman (super toxic and how do you cast a metal that is liquid at room temperature?).

But even if you use the "canonical" planetary metal list you are missing the point, the power of the talisman is not in the metal out of which it is made and the point of a talisman is not to look pretty or please your aesthetic sense, these are points of contact with powerful spiritual beings!

The power of an astrological talisman comes primarily from the carefully elected time of its making and the consecration to the appropriate spirit. Materials are much less significant.

As Thabit Ibn Qurra says, "you should begin to work on the image [i.e., talisman], that is, by means of casting it in the form you have made from gold or silver or copper or lead or tin. It does not matter of which of these metals the image is made, because its health and strength require nothing else; it is perfected by the exactness of the ascendant alone." De Imaginibus, Chapter V.

We have two factors operating here, unconscious modern atheistic/materialism and a traditional push for "natural magic". As moderns, even if we try to be spiritual, our reality is basically materialistic. "Obviously" the power of a material item comes from its material form and what it is composed of. Also the material is tangible and we understand it, whereas the astrological timing is complex and unknown. Ficino and other Renaissance mages were under a great deal of suspicion and pressure not to be dealing with spirits so they tended to explain talismans as operating "naturally" without the need for consecration, when in fact this is the key to astrological magic! Natural magic dovetails nicely with modern materialistic thought.

So whether we use gold, silver or bronze, the power of the talismans comes from the timing of their making and subsequent consecration. Gold and silver look nice, but are not necessary. A 24k gold talisman cast at a time inappropriate for the Sun will be weaker than a paper talisman made at the appropriate time.

We will continue to cast a few talismans in silver, but bronze, in both the ancient bronze, traditional reddish color and white bronze, make attractive, hefty, and above all POWERFUL talismans.

Our next casting, in early December, will be the ever popular Algol anti-curse talismans. These are our most powerful curse and spiritual protection talismans. Silver Algol talismans will have a pre-order price of $400 and regular price of $500. Ancient Bronze Algol talismans will be $200. E-mail me at chriswarnock@renaissanceastrology.com for more info!
Posted by Christopher Warnock, Esq at 11:03 AM

While I agree fully with your sentiment, I think the modern view tends to skew not towards the metals containing powers in and of themselves, but rather that certain metals make better links to particular powers. Using the "proper" metal could be seen as a clean window opposed to a dirty or foggy window, helping what is transmitted through it to manifest more clearly.

While I concede that there may be some small merit in this, as someone who frequently uses paper talismans I don't think it makes enough difference to worry about.

I agree that it is nice to have appropriate metals. We do always add the planetary metal to our casting, but I don't think that a Sun talisman, for example, needs to be 100% gold to be effective, otherwise we can just forget about making Sun talismans.