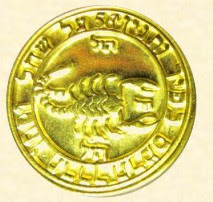 I got a HUGE shipment of new talismans from Wade yesterday! I was like a kid in a candy store looking at all these new talismans & pentacles. One surprise was that the guy that did the finishing decided to go ahead and gold plate everything, WOW, all that gorgeous gold!

So first up are Mars talismans and Mars pentacles! Hmmmm....Mars? I think it's easy to overlook Mars, but he is very important. Mars gives you strength and determination, plus energy. Jupiter is great for wealth and prosperity, but leaving out Mars can lose you a key ingredient of success, DETERMINATION! Actually I'm finding one of my biggest obstacles these days is feeling tired and dragged out. If you are depressed and worn out, definitely worth considering Mars.

Now if your Mars is in Aries, Scorpio or Capricorn, Mars talismans are a GREAT fit for you. Mars in Libra, Taurus or Cancer, yellow flag! Be cautious, do a divination or paper Mars talisman to check out his effects. Mars in any other sign is fine. Mars combust or retrograde without other dignity, also a yellow flag.

So let's look at our brand new Renaissance Astrology Mars talismans & pentacles. First note that the election for these talismans was VERY STRONG! Mars is dignified by sign, by term and by face, a true SUPER +8!! I don't live and die by the dignity scores, since you can get quite good effects from exaltation (+4) on up, but it sure is nice to have the super strength.

So here are our new Mars talismans these are our STRONGEST Mars talismans and were made in a limited edition of just 5!!!! They are gold plated red bronze and really do look gorgeous with our visionary artist Robert Place's new Mars design from Agrippa.

The Renaissance mage Cornelius Agrippa says a Mars talisman, "makes a man potent in war, and judgments, and petitions, and terrible to his enemies, and victorious against them..." Three Books of Occult Philosophy, Bk II,ch 22. On the front of the talismans is the image of Mars from Agrippa, "...they made another Image of Mars for the obtaining of boldness, courage, and good fortune in wars, and contentions, the form of which was a souldier armed and crowned, girt with a sword, carrying in his right hand a long Lance; and they made this at the hour of Mars, the first face of Scorpio ascending [or culminating] with it." Three Books of Occult Philosophy, Bk II,ch 40.

There are just a few of these Mars Scorpio talismans, our most powerful Mars talismans. They are $299.95 plus shipping. Order info here

We also have Mars pentacles!!! This is the first time we have had Mars pentacles. Again we have just a few of each pentacle and they are also SUPER +8 and gold plated bronze. You can see the Mars pentacles here

I really like the 5th Mars pentacle (cool scorpion design!) for protection against demons and evil spirits!

The 6th Mars pentacle also looks very good for physical protection, very rare powers. We have just 2!!! of these.

So very interesting to check out, very exciting new talismans and pentacles. We will have more new talismans to come in the near future!