Spirits from Above:
Liber Antimaquis and Astrological Magic 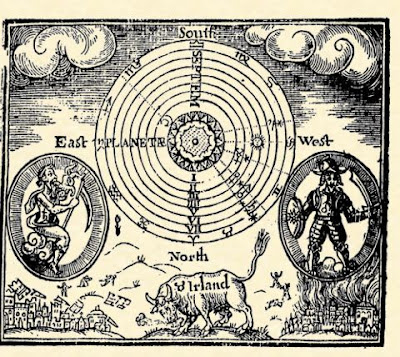 As the planetary spirits move through their spheres and through the Zodiac, changing in essential dignity, as well as accidental dignity from these movements come “good and evil, fortune and misfortune” to all creatures, all that is created of matter. This is a classic explanation of the role of the stars and planets, as the intermediaries between the purely spiritual and the material. The cycles of the Heavens foretell or control the cycles on Earth, depending on what paradigm you adopted.

But the influence of the planets is not equally or promiscuously distributed, instead the people in particular parts of the world, the regions ruled by each planet and depending on the function each person performs, are also ruled by each planet. Finally, Liber Antimaquis says that the planets are assigned to “every man according to the share of intellect he has.” On one hand we could take this as a quantitative measure of intelligence, but I think rather that it has to do with the different thought processes and thinking typified by each planet.

What is the mechanism for this influence exerted by the planets? The Liber Antimaquis explains that the powers (“virtues”) of the planets are embodied into souls and the natures and complexions of the planets run into and are conjoined with souls.

Ok, to moderns this is somewhat confusing. Soul, spirit, virtue, complexion, have all changed their meaning since the Renaissance. Let’s begin to see some connections by looking at the macrocosm, the Great World of the Cosmos and the microcosm, the Little World of each individual. As Agrippa notes in his Three Books of Occult Philosophy, the cosmos can be seen as having a three fold structure of the Material World, Divine World and Intermediate Celestial World. In the individual these correspond to the physical body, the divine spirit and the intermediate astral body. Sometimes the divine spirit is called soul and sometimes this term is used for the intermediate spiritual body, referred to in other traditions as chi or prana.

So the astrological spirits, themselves intermediary, are connected to the intermediate astral body. Their powers are their natural qualities, their nature. This is in a sense an active influence, but also like the warmth of the Sun or coolness of a breeze, simply an expression of the basic nature of these spirits being what they are.

Finally the Liber Antimaquis says, “in every man, as the planets operate in his nativity, so descend the spiritual virtues of each of these spirits”

So now we again have a differentiation of the planets, whose powers are different depending on a person’s nativity. As I read this it is not saying, for example, that if Saturn rules the 7th in your natal chart, that Saturn can be used as a love talisman for you. Saturn’s power is his nature which is not changed by the time of your birth, rather the question is how apt are you to accept this nature? The natural power of Saturn will descend strongly, moderately or perhaps only a little, if Saturn is strong, moderate or weak in your chart.

In discussing astrological magic, Picatrix says, “…workings were more certain if the planet was strong in the natal chart of those people who performed the working.” Picatrix Bk I ch 5. And paralleling the Liber Antimaquis Picatrix says of a Jupiter ritual, that the spirit of Jupiter “will reach out to him…especially if Jupiter is strong in his nativity.” Picatrix Bk III ch 8.

“Reaches out to him” encapsulates very nicely the sense of the astrological spirits as personalities with a specific predisposition to each individual and really shows the underlying devotional focus that guides my interactions with the celestial spirits.