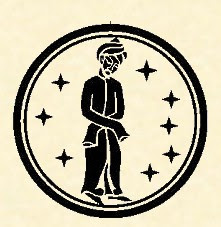 My current chart for May is a fixed star Alkaid protection talisman. Alkaid is the furthest star in the tail of the Great Bear, the Cauda Ursae Majoris.

Hermes on the 15 Fixed Stars says that of the Tail of the Great Bear that it,

"...is strong against incantations and against assassins and gives security from them, and if with this is placed the tooth of a wolf it protects also from robbers and thieves."

Definitely a great all around protection talisman as you usually don't combine protection against spiritual AND physical attack.

Nigel Jackson's wonderful Alkaid image of a pensive man, which you can see above to left, looking very much like a darvish, a Sufi in other words, points us towards some of the other interesting associations of the Great Bear.

As one of the circumpolar constellations, the Great Bear, in the northern temperate latitudes, never sets. Instead it circles round Polaris, the Pole Star turning on the axis of the Cosmos. The Great Bear points us astronomically towards that spiritual realm that itself never sets, the Divine Realm of the Platonic Ideas that do not change or pass away.

The Great Bear puts us in mind of the Sufi idea of the Qutb, the Pole, the person who is the spiritual center of the age. Often hidden, the spiritual life of our time revolves around this person.

So many threads, paths and spiritual byways with regard to guidance and spiritual orientation cluster around the constellations of the Big & Little Bear! Note, for instance, that Hermes on the 15 fixed stars, points to a magnet as associated with Alkaid.

I am very much looking forward to creating Alkaid mirrors and having Alkaid silver talismans. I am also excited about working magically with the constellation of the Great Bear!