Talismans and the Guardian Angel/Daimon 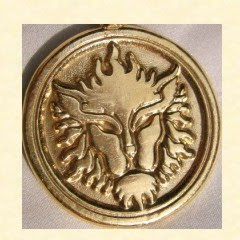 I had an interesting question recently on my discussion group Spiritus Mundi regarding the use of astrological talismans and your guardian angel/daimon.

That individual guardian angel/daimons are under the rulership of various planets is a fairly common formulation in later Neoplatonic and Hermetic thought, though Iamblichus makes the point that the entire cosmos is present in each individual and that simply identifying the almuten of the chart doesn't tell the whole story.

Picatrix discusses our individual Perfect Nature which functions similarly to the guardian angel/daimon,

"Aristotle said furthermore that each sage had his proper virtue infused into him by exalted spirits, by whose powers their senses were closed, their intellects opened, and sciences were revealed to them. This virtue was conjoined with the virtue of the planet ruling the radix of the nativity, so that the virtue thus co-created in them strengthened them and gave intelligence to them."

Once identified it certainly would make sense to work with the planet that is your almuten figuris. This can be done through ritual, meditation and the use of talismans since these are ways to contact and connect to your guardian angel/daimon/Perfect Nature