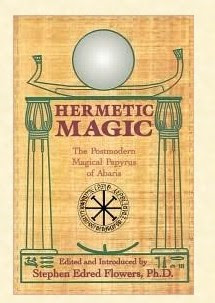 I was definitely prepared to dismiss this as another frothy New Age production with the term “hermetic” used as a synonym for esoteric, occult or simply “cool”. Instead Flowers does a good job of outlining the true history of classical Hermeticism, explaining its mixed Greek and Egyptian roots, its subsequent history, cosmology, Hermetic gematria and the operative magical use of Hermeticism in the Greek Magical Papyri.

I’m not wild about the term “postmodern” which already has a current definition that to my mind doesn’t fit how Flowers uses it, because postmodernism is still atheistic/materialistic. On the other hand, what should we call the worldview that is necessary for astrology, alchemy and magic? A bit of a conundrum! Flowers is entirely correct, however, in pointing to a change from the modern worldview as a prerequisite for true contemporary Hermeticist.

I also wasn’t wild at first about the “Epistle of Abaris” which is Flowers’ own creation of a Hermetic text. Then I realized that this was totally traditional! Flowers’ epistle is certainly within the mainstream of Hermetic thought and one would not balk at it if it was part of a newly found ancient Hermetic manuscript.

Ultimately, I realized that basically any problem I had with Hermetic Magic stemmed from bad vibes off of the “postmodern” title. In point of fact, this is a very good introduction to the history, theory and practice of magic within classical (1st to 4th centuries AD) Hermeticism. Flowers points to all the key sources, the Corpus Hermeticum, the Greek Magical Papyri, which you can then read in the original. Ultimately, I think that Flowers’ approach, seeing the origin of Hermeticism in synthesis and then immersing oneself in pre-modern Hermeticism and then finally producing a new synthesis, within this tradition, is the correct approach.
Posted by Christopher Warnock, Esq at 11:45 AM

As a practicing Pagan I believe that Hermeticism is the heart and soul of all that properly comes under the heading of "modern" Paganism.

In addition to being the God of language and writing and boundaries, Hermes is also the God of crossing boundaries, and, as such, becomes the God of theft and deception. This helps to explain how Hermeticism managed to steal its way through the long dark (and dangerous!) tea-time of the Middle Ages under false pretenses.

All hail the living God, Hermes, who kept alive the ancient light of Wisdom.