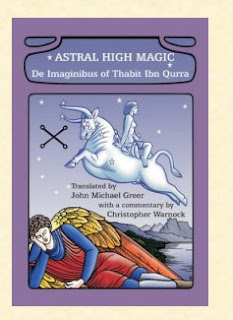 I am very pleased to announce the launch of the newest book from Renaissance Astrology, Astral High Magic: De Imaginibus of Thabit Ibn Qurra. Here is a link for MORE INFO


"What's this Chris?" "Don't you already have a translation of De Imaginibus?" "What's it about anyway, I've never heard of it?"

Ok, first this is a brand new and greatly expanded translation. I did the earlier translation, John Michael Greer, whose Latin is far better than mine, did this second and much improved translation. One thing that makes a big difference is that this translation uses two different versions of De Imaginibus, where the earlier translation was just based on one. So significant and important improvement! I've also gone ahead and revised my already extensive commentary and added several example talismans and charts, so you can see these talismans in action. Finally, Astral High Magic features the art of Robert Place, a very talented visionary artist.

But what is De Imaginibus? Why is it important? De Imaginibus means "On Images" or more loosely, "How to make talismans" This is the most important book of astrological magic after Picatrix. Everybody who was anybody, Albertus Magnus, Ficino, Agrippa and even Picatrix, quote from and use De Imaginibus. And truly it is the highest of high magic since it combines ceremonial magic with house based talismans the height, the acme, the summit of astrological magic.

This is a key text and if you are at all interested in astrological magic you want to have a copy, particularly of this newest, highly revised edition with a new, bigger translation.

Here's what John Michael Greer, the translator had to say about Astral High Magic: De Imaginibus of Thabit Ibn Qurra:

First of all, Chris isn't overstating the importance of this book. It's not an equivalent of Picatrix in any way; where the unknown author of Picatrix was a collector and editor who assembled every scrap of magical lore he could get into one big volume, Thabit ibn Qurra was one of the major intellectual figures of his time, a brilliant scholar and astrologer who wrote on a wide range of subjects and received patronage from the very top end of the political scene. De Imaginibus is Thabit's own work through and through, a description by one of history's greatest astrological magicians on his methods of casting elections for world-class talismans. Translating it was a little like sitting in a corner of Thabit's study and looking over his shoulder as he worked; I tried to catch some of that quality in the translation.

Second, while Chris tends to be overly modest about his Latin abilities, I had a huge advantage in making my translation that he didn't have -- since I was working off two different Latin translations of the Arabic original, which routinely used different words and grammar to communicate the same point, I was able to get a much more precise sense of Thabit's meaning. There are some places in each version where the Latin is ambiguous, and in making his translation from one version, Chris was forced to guess at the meaning; his guesses were good ones, by and large, but as it happened, some of them were wrong -- and that led him to misstate some important details of the magical work. Even if you've got the older translation, in other words, , you need the new one.

And if you don't have the older translation, and you're going to be practicing astrological magic -- well, in that case, you need the new one!
Posted by Christopher Warnock, Esq at 7:21 PM