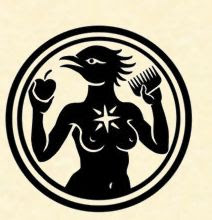 I am very pleased to present a new current chart, the Venus rising in the 1st degree of Pisces talisman.

This can be a tough talisman to elect for, since Venus needs to be in the 1st degree of Pisces, (that's 0 Pisces 1 to 0 Pisces 59, not 1 Pisces!) and rising. We haven't been able to do this for several years so I am excited about this opportunity to make a rare talisman.

"From the operations of Venus they made an Image, which was available for favor, and benevolence, at the very hour it ascending into Pisces, the form of which was the Image of a woman having the head of a bird, and feet of an Eagle, holding a dart in her hand. "

This Agrippa image is based on several different images from Picatrix,

"Image of Venus. If, under the influence of Venus, you make the image of a woman whose body is human with the head of a bird and the feet of an eagle, in her right hand an apple and in her left hand a wooden comb....everyone who carries this image...with them will receive good and be liked by everyone."

"If, under the influence of Venus, you make the form of a woman, holding an apple in her right hand and a comb in her left hand, in white stone, the first face of Libra ascending, whoever has or carries the above image will always laugh and be cheerful."

This is very interesting! Note that Agrippa switches Venus' sign Libra for her exaltation, Pisces and combines the two images, showing flexibility and not following slavishly, but not departing entirely from his traditional source, Picatrix. He's not just making it all up and not trying to use a Saturn image for Venus, but on the other hand he's not FREAKING OUT that image doesn't follow Picatrix TO THE LETTER! We can see a master astrological magician in action here, innovating, but fully within the tradition in that innovation.

So, now the most important point, why would you want to make this talisman? Venus is the planet of love, friendship, arts, music and pleasure, so if you want these things, Venus is your planet. This particular talisman is for favor and benevolence, which I read as improving your social skills and getting along better with people, having people like you more and more.

And this is fine, if you are focused on what you want and how you can benefit from this and other talismans. We do need to enhance our lives and our ego selves. But it is possible to use astrological magic as part of our spiritual path as well. But how?

I do a daily invocation of the planet that rules the day and have done so "religiously" for almost a decade. The invocations are adapted from Picatrix see my Secrets of Planetary Ritual Paperback and Kindle versions. so these invocations do involve petitions, ie they often ask for things, but generally these are things like health, prosperity, safety and wisdom, general goals, as opposed to "make X love me" or "bring me $100,000" You can ask for specific stuff, but I like the idea of the superior wisdom of the planetary spirit deciding for me exactly what I need.

Further, through doing an invocation of an astrological spirit I am getting closer to that spirit and building up our relationship. I am aligning myself with the spirits of the planets and the stars who are, at the celestial or intermediate level, responsible for everything in the material world. These are key spirits in the Great Chain of Being connecting us to the Divine World of Archetypes and Platonic Ideas and eventually to the One.

These are not our servants, we serve and embody them! They are not waiting around to get us stuff, but we benefit greatly by being in their presence and rising to their spheres. These are beings of incredible power beyond our limited understanding and comprehension. While it certainly is a valid traditional approach, I find it presumptuous to command these spirits.

To get a sense of their otherwordliness, their being beyond our ken, look at the very bizarre image of Inanna, the Sumerian Venus at the Venus rising in the 1st degree of Pisces talisman which corresponds to the Agrippa and Picatrix descriptions: a woman with the head and feet of a bird. Strikingly weird! Meditate on this image and see that Venus is numinous filled with great spiritual power beyond our limited understanding.

So while it's great to do a Venus love talisman, (Venus loves love!) perhaps you are intrigued, hopefully mysteriously drawn to invoke and contemplate these very powerful, very numinous, ultimately inexplicable spirits.