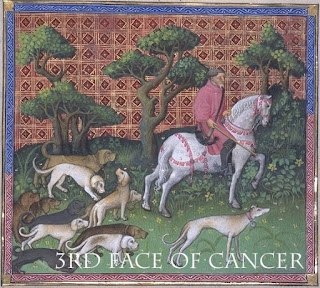 As noted the 36 decan/faces are a complete picture of reality, containing all possible interactions in the sub-lunary realm, not simply a shopping cart full of possible talismans and effects we can order up at our whim to fulfill our wishes.

This Mansion seems characteristic of the animal realm and the ashura realm, of hunting and struggling, of struggling for power and domination. Personally I've been able to see this in what I call "cat world" which is the interactions of the neighborhood cats. While they all are well fed and housed, they still can't help fighting over territory and dominance. One cat is the king for awhile, until they become tired and a new king arrives. "Long live the king!" We can see very easily this same process taking place in the human realm.

Posted by Christopher Warnock, Esq at 9:56 AM