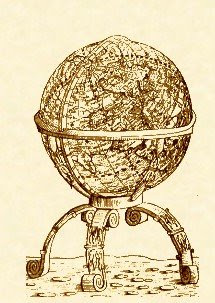 Being an astrological magician is something of an odd combination since it often seems to me that with astrologers and magicians, never the twain shall meet.

I was amused the other day to stumble across the blog of a ceremonial magician who "don't know much 'bout astrology", but still had very strong opinions on the subject! They didn't like planetary days and hours, they liked modern planetary rulerships and had even invented some of their own! Their key point, however, was that they wanted to do magic when they wanted to and found worrying about astrological timing irksome. Still, they had astrology on their to learn list. I found it heartening that a modern magician had any familiarity with Renaissance magic at all and in particular that despite their manifest and manifold criticisms, that they were willing to learn astrology.

What was entertaining about the post was the lack of awareness that these views and opinions were not their own special creation and the expression of their unique individuality. "A little knowledge is a dangerous thing" is of course a perennial problem and who of us has not fallen into the trap of having stronger opinions on a subject than our depth or rather shallowness of knowledge makes prudent? What is utterly typical however, are magicians resenting the idea that they can't simply do astrological magic whenever they wish.

Magic, is after all, about will and about the exertion of power and influence. The magician sees the interconnection of all things in the Cosmos through spiritual bonds of sympathy and says, "Hey, what can I do with with this?" The magician needs to exercise their will, needs to feel that they are the fulcrum of the magical operation. Without will, no power and no magic. Will is therefore a professional requirement so to speak. It is also the reason that magicians tend to be self absorbed, argumentative, self centered, ego-maniacs. A magician saying, "I don't like astrological timing because I want to do magic when I want to" is about as individualistic as a frat boy that says, "I don't like the 21 year drinking age". One is about as likely to be a magician who doesn't mind external restriction as a frat boy who isn't a binge drinker.

Still, it is actually easier to teach astrology to a magician than magic to an astrologer. Again, I think much of this "comes with the territory" because of the astrologer's basic outlook. Of course a modern astrologer is going to be freaked by the idea of magic because their astrology is "scientific" gravity or magnetism or something. The association of magic and astrology is merely an embarrassing anachronism and soon astrology will be taking its rightful place along with chemistry and biology.

What's somewhat more odd is the fairly widespread rejection of magic by traditional astrologers. They generally acknowledge the spiritual basis of astrology shared by magic, but have no desire to do magic and frequently have an almost instinctive aversion to it. Part of this, of course is the deep Judeo-Christian programming that is unconsciously hardwired into modern society, even for the consciously pagan, that looks upon magic with great suspicion. Still the basic astrological outlook is the key force.

Again if we consider that the Cosmos is one great spiritual being bound together by spiritual sympathy and correspondence then the astrologer looks at this pattern in a passive way, unlike the active method of the magician, and sees the cycles of Heaven reflecting the cycles on Earth. They're really not set up to do much about it, though! Using electional and choosing times to take action is about as far as an astrologer is comfortable going. Again, it's funny to watch astrologers insisting that they have solid, individualistic reasons for not doing magic when in fact, for the most part they are simply doing what astrologers do.

This makes the astrological magician a odd duck since they combine the two somewhat disparate approaches of astrology and magic. In fact, a duck is an excellent metaphor being aquatic and airborne and waddlingly terrestial. The astrological magician needs to use will, but then needs to be patient and and apply that will at the astrologically appropriate moment. This combination of opposites is very Hermetic, in fact. Hermes being a liminal god, literally a god of doorways, which are neither in nor out of the building, crossroads, neither of one road nor the other and other borderlands. Personally I've always loved having it both ways and being neither exactly fish nor fowl, which is, I suppose an excellent example of my devotion to my patron Hermes Trismegistus.

In the end, I too, must realize that my drives, desires and talents are not my own unique, special creation, but an expression the forces that combined in me. This is apparent from meditation and contemplation of self and from one's birth chart. Still, for those that wish to follow a true Hermetic path, in the tradition of the Corpus Hermeticum, than astrological magic has its attractions. This is not to say that there are not plenty of other paths to follow, the key is finding a path with heart that is appropriate for you.
Posted by Christopher Warnock, Esq at 1:24 PM

I liked the sentiment of this post. Personally I do not know much about Astrology, but I recognize it's merits. Astrology and magic would probably be 1 + 1 = 3. Like the Tarot and the Qabbalah.