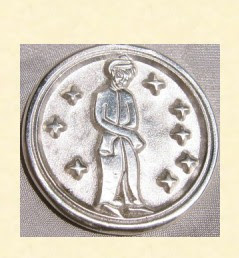 I've had a number of e-mails following on the latest set of e-mails asking how talismans relate to the birth chart.

First of all it appears that in traditional Western astrologer the choice of talismans was more task than natal chart oriented. In other words clients or the mage themselves were thinking more about what they wanted to accomplish, eg wealth, love, success, rather than starting with their birth chart. That being said, Picatrix says that planetary invocations and by extension, planetary talismans are stronger when the planet itself is strong in the birth chart of the user. Picatrix, Bk I, ch 5, trans Greer & Warnock at 42.

So it makes sense to take a look at the natal chart of the user and see what planets are strong, weak and afflicted and use that as an aid in choosing talismans. Let's look at a specific chart as an example. Here's a chart from my
example Full Natal Reading for 11:51 am MST September 17, 1936 Boise, Idaho

Jupiter, the natural ruler of wealth, is quite strong in this chart being dignified by sign and triplicity

Mars, natural ruler of strength, determination and success, is dignified by face

Mercury, natural ruler of memory, intelligence, communications and business, is dignified by triplicity, but retrograde.

Saturn, natural ruler of discipline and occult wisdom, is peregrine and retrograde.

This native (person whose natal chart is being examined) would get a strong effect from Jupiter and Venus. Mars, the Sun and the Moon would all benefit from talismans, though the effect would not be as noticeable as Jupiter and Venus. Mercury is mixed in dignity and debility and could benefit from a talisman. Saturn, being a malefic and retrograde without dignity, is probably best avoided.

Now this chart has an interesting feature. Normally fixed stars or Mansions are compatible with everyone, unless they are afflicted or negatively affected in the natal chart which is unusual. In this chart, Spica, the most benefic of fixed stars, is conjunct the Moon! This makes Spica a good choice for a talisman for this native.

So, interesting example. I include a full Talismanic Prescription
with all my natal readings including
the Astrological Checkup
Spiritual Path Reading
and Full Natal Reading .

Also if you are seriously interested in buying a talisman, I am happy to see if it is compatible with your birth chart. Just e-mail me at chriswarnock@renaissanceastrology.com with the talisman or talismans you are interested and your date and place of birth, plus time if you know it, though time is necessary for testing talisman compatibility.
Posted by Christopher Warnock, Esq at 10:22 PM