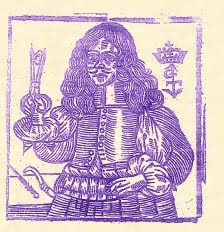 I had a very interesting question recently regarding the Moon aspecting a fixed star. The questioner wanted to know whether you used the full orb of the Moon or her moiety, half her orb. Good question!

Orbs are zones of power spreading out from the exact aspect, known as perfection. According to the English astrology William Lilly, in his 1647 Christian Astrology at page 107 the Moon's orb is either 12.5 or 12 degrees. Here is Lilly's orb table.

First off, don't use orbs like a cliff, use them like a gentle slope. Lilly himself says "I sometimes use the one [orb measurement], and, sometimes the other, as my Memory best Remembereth them, and this without error." Christian Astrology page 107. It is not as if the orb of the Moon is fully effective to exactly 12.5 degrees and then at 12.51 degrees we ignore it completely. The closer the aspect to perfection the more powerful, the farther it is the less powerful it is until it basically fades out. Orbs are reasonably flexible rules of thumb. I set the orbs on my astrological software way out so I can see all the aspects the planets are making even if technically out of orb.

Secondly, orbs and moieties. I am told that in modern astrology it is the aspects that have orbs, but in traditional each planet has an orb. This is split in half for a moiety. So if the Moon's orb is 12, her moiety is 6. With aspects of planets to planets you add the moiety of each planet to see if they are in orb. Thus Moon orb 12, moiety 6, aspecting Mercury orb 7, moiety 3.5, 6 + 3.5 = 9.5 orb of Moon/Mercury aspect is 9.5. Again don't just ignore an applying aspect of the Moon to Mercury if it is 10 degrees, it is just a lot weaker than 3 degrees away!

Now when we pass to planets aspecting non-planets like house cusps, Parts, Nodes, fixed stars, outer planets, etc., for the orbs we need to delve deeper into the background of aspects. Aspect comes from the Latin, aspectus, literally looking, seeing or facing. Only planets make aspects, ie, they alone see or face. Similarly, only planets rule signs or houses. Planets are the real actors in the chart. True the signs are sometimes said to "rule" illnesses, parts of the body and places, but I like how Lilly says they "signify" these things, that is they correspond to them, rather than actively rule or cause them like a planet.

So as it always seems in traditional astrology, we have exceptions, however, when it comes to aspects it is solid, only planets aspect. So this means we use the full planetary orb, not the moiety, since the non-planet has no orb and thus no moiety of its own to contribute. Thus if, for example, the Moon was 7 degrees from the Midheaven and as her orb is 12, the aspect is well within her orb.

Treating the planets as the most "active" and in a different fashion from Parts, Nodes, house cusps, etc., is a major difference between traditional and modern astrology. In modern astrology the nuance has been lost and everything acts likes everything else, eg Parts aspect house cusps aspect Nodes, rather than planets being the primary actors.
Posted by Christopher Warnock, Esq at 11:54 AM