My Take on Reception 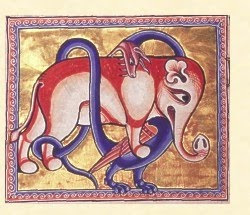 Ok, reception is another area where we can see change and simplification over the entire range of traditional astrology. The later Renaissance astrologers had simplified the medieval astrology of Bonatti who had already simplified the very complex early medieval Arabic teachings of astrologers like Abu Mashar and Mashallah. Reception is a good example of this, since by the 17th century reception simply meant two planets each in each others sign or exaltation or a combination of sign and exaltation. Thus the Moon in Leo and the Sun in Cancer, or the Moon in Aries and the Sun in Taurus, or the Moon in Aries and the Sun in Cancer. What me might call "17th century reception" is basically mutual reception, by the Renaissance reception and mutual reception have become synonymous.

However, this is another Renaissance simplification. Guido Bonatti, the medieval author of the encyclopedic Book of Astronomy says of reception,

Ok, so what Bonatti is saying is that to have reception you need:

(2) At least one of the planets in the dignity of the other.

Now we can get into all sorts of complex permutations of terminology, but I like the clarity of reception requiring an aspect and generosity simply indicating being in the dignity of a planet. Either way this these show a connection and/or special relationship between the planets that are in reception or in generosity and the people or things they signify.

Ok, so this is how I explain reception and generosity. This is certainly not the only way, nor is it the "BEST" way since I don't think that there is one, perfect, best for everyone for all time method. Of course at the same time there are lots and LOTS of plain wrong methods!
Posted by Christopher Warnock, Esq at 12:23 PM

Very nice! I've noted, in practice, that many of the mutual receptions which cannot include a classical aspect (Mars in Libra, Venus in Scorpio, etc) generally do not give the type of positive results which a reception would suggest.

Well, an additional explanation is that Bonatti says that if a planet is in detriment (presumably also in fall) or aspecting a planet in detriment (or fall) that reception is not effective.