Ritual Use of Candles & Free Beeswax Candle with Talisman Order 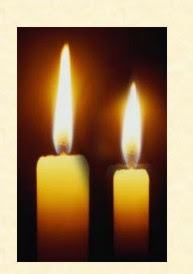 I just thought I would post a few thoughts regarding the ritual use of candles. Lamps, which use a fuel that is liquid at room temperature and a wick, were more prevalent in the classical period in the Mediterranean, but by the Middle Ages and Renaissance, certainly in northern Europe, candles, which use a solid fuel and wick, predominated.

Picatrix, written circa 1000 AD mentions both candles and lamps for magical and ritual use. Agrippa has a whole chapter on lights, colors and candles at Three Books of Occult Philosophy Bk I, ch 49. Light, says Agrippa, has very special properties, originating in the mind of the One and diffusing through the 3 Worlds, Divine, Celestial and Material.

"Also there are made artificially some Lights, by Lamps, Torches, Candles, and such like, of some certain thing, and liquors opportunely chosen, according to the rule of the Stars, and composed amongst themselves according to their congruity, which when they be lighted, and shine alone, are wont to produce some wonderfull, and Celestiall effects" Three Books of Occult Philosophy Bk I, ch 49

Agrippa lists the various colors appropriate to the planets:

Moreover amongst the houses of the heaven, the first and seventh hath
white colour: the second, and twelfth green: the third, and eleventh
saffron: the fourth, and the tenth red: the fift, and ninth honey
colour: the sixt, and eighth, black.

Until the 19th century candles were typically made of beeswax or tallow (animal fat). Now most commercially available candles use paraffin which is made from petroleum. Paraffin candles can be dyed so in rootwork and hoodoo (Southern Folk magic) in the early 20th century colored candles began to be widely used.

For rootwork the candle colors were task based:

When I first started doing astrological magic over a decade ago, there was very little authentic medieval or Renaissance astrological magic ritual available so I began with rootwork as my first magical practice. The basic rituals I provide with Renaissance Astrology talismans still have this flavor since I suggest colored candles for various planets. As you can see, however, this makes sense given Agrippa's discussion of candles and colors of lights, even though medieval and Renaissance magicians would not have been using colored candles.

I have actually gone back to medieval and Renaissance practice and started using beeswax candles. Paraffin candles can cause sensitivities due to their fumes. Beeswax candles smell like honey! Beeswax candles are a rich yellow honey color as well. I have been using them for all my ritual work with good results! Now couple of things to mention, they are more expensive than paraffin candles and they do take some futzing around with. You need to keep the wick trimmed and if you get the votive style beeswax candles they can "tunnel" burn down inside and leave thin wax walls. I just fold these in so the candles burns evenly.

I'd like to encourage the use of beeswax candles, so if you buy a talisman from today, November 6 to Sunday November 14, 2010, just remind me and I will include a free 2 inch beeswax votive candle! These are 100% natural, organic and smell just like honey when they burn.

Ok, let me describe how I use candles. I'm very big on mirrors and lights for my altars. If you take a look at one of my earlier altars you can see that I have white votive candles burning on the altar. I try to keep a candle burning in front of the planet of the day. If I am not in the room, out goes the candle! Safety first! DO NOT LEAVE CANDLES BURNING UNATTENDED!

In addition to the constantly burning candle for the planet of the day, I also invoke the spirits of the 3rd and 13th Mansions when the Moon is in those Mansions every month. I start the candle when I do the invocation and then let it burn completely, putting it out and restarting it, when I am in the room. I do the same thing, starting a candle and letting it burn out, when I do any invocation for a talisman.

I really do feel like burning a candle is about the minimum you can do for an invocation. I am rather sensitive to incense smoke and tend to just do micro amounts. For the 3rd and 13th Mansion, I might do just one or two beads of natural resin on a very small piece of charcoal. I certainly couldn't have incense burning all the time, nor do I burn clouds and clouds of it when I do invocations. Still some sort of sacrifice, ie burning incense or at a minimum, a candle does seem necessary. I once was trying to do a Jupiter talisman workshop and we couldn't do incense and the candles didn't work either. So I did the invocation without them and 15 minutes later my Jupiter talisman disappeared! Something had to be sacrificed if there were no candles or incense!

So, personally, I use lots and lots of candles. I buy white or natural beeswax by the case and use them for all my ritual work. This seems to work, but appropriately colored candles work well too. I also tend to use just one candle, though again you can use an appropriate number. Agrippa, in Three Books of Occult Philosophy Bk II, ch 22 gives the following numbers

For me, it just wouldn't be a real invocation or ritual without candles and my altar would look bare without its perpetual planetary candle going! So like I said, if you buy a talisman from today, November 6 to Sunday November 14, 2010, just remind me and I will include a free 2 inch beeswax votive candle! These are 100% natural, organic and smell just like honey when they burn. Try out the original, just like Picatrix or Agrippa would have used!
Posted by Christopher Warnock, Esq at 7:33 PM

This may be a dumb question, but from a magical/spiritual standpoint, what do votive candles do? I've always found fire and candles 'magical', but don't know why.
I belong to a liberal Episcopal church which follows the Anglo-Catholic tradition (high mass) with only *real* candles and lots of incense (unlike Chris, I love it). When I have something particularly important to pray for, I still feel compelled to light a votive candle in church; in order to keep it special, I only do it for particularly pressing matters.
I've been in Roman Catholic churches with friends over the past few years, and every single one of them now has those horrible and tacky electric votive 'candles' which are on a timer. All the 'magic' and mystery has been totally drained from them.

When I say "votive" candles I am speaking of somewhat squat thick candles that are burnt in a glass container, helpful for breezy altars and not wasting wax.