The College of Astrology Trap! 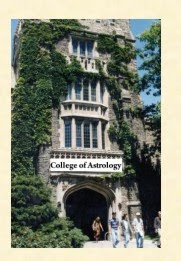 I stumbled across a new "esoteric" institute today and immediately noticed that they wanted to be cool, hip and with it and associate themselves with astrology, alchemy and magic, but they wanted to be official, legitimate and academic at the same time. They had cool sounding classes, but also a plagiarism policy. They had classes "about" esoteric subjects, but not actually teaching any practical applications and all their faculty members needed academic degrees. Ah, the latest either victims or perpetrators of the College of Astrology Trap!

Kepler College was the probably the most famous example of the College of Astrology Trap. Kepler was set up with great hoopla and huzzahs, particularly from the modern astrological "community" Kepler was going to be a degree granting, fully accredited university of astrology. Eventually hopes were that it would have a campus, but to start, students would travel in regularly after having correspondence courses most of the time. Kepler would follow the standard American academic model, have academically qualified lecturers, obviously the best way to teach.

Frankly I was always skeptical, right from the get go. Personally, I had a great time at college in the US, but I can't say that I really learned that much. Law school, in terms of learning, was an utter and complete waste of time and landed me with $50,000 in debt. Certainly from the standpoint of social prestige college and particularly law school was useful and I got my union card punched, but it was an extremely wasteful and expensive way not to learn. And let's face it, the real point of college is to get a job. Which college you go to ranks you and your grades rank you and then employers use this ranking to hire you for something that has nothing to do with what you ostensibly studied.

This made Kepler College particularly ridiculous. First of all, it was NEVER going to get accredited. They had a heckuva time even getting the provisional right to grant degrees, while the opposition from the atheistic/materialist elite completely blocked any chance of granting accredited degrees. Secondly, even if they had managed to get accredited, how were you going to get a job with an astrology degree? So in other words, from a usual, practical standpoint of a normal American college education you would have wasted thousands of dollars getting a useless degree.

From the standpoint of actually teaching astrology, on the other hand, Kepler was also really off base. My opinion is that the standard American style university teaching method is a terrible way to learn anything. While that's certainly debatable, it certainly is extremely expensive. For what Kepler students were paying for a year of the multi-year programs, you could take all of my courses, Deb Houlding's courses, Zoller's course that New Library "liberated" from him, a whole slew of other traditional astrology courses, though it might not also stretch to John Frawley's 2,000 pound horary course.

Of course, the other problem that Kepler had was that it was trying so desperately hard to be accepted by the academic establishment that it had to keep de-emphasizing actual astrology and keep pushing more and more deeply into studying "about" astrology and those silly, misguided, quaint old souls long ago, who actually bought into its foolishness. Those who can't or rather refuse to do it, teach it. Truly the motto of modern academia, particularly when atheistic/materialism is the required philosophical outlook.

So Kepler ended up being overpriced, teaching less and less actual astrology, but not being academic enough and denying astrology enough to get accredited, thus being the most famous victim/perpetrator of the College of Astrology trap. They were not the first and will not be the last to try to bridge the unbridgeable, just like those that insist that science and spirituality are drawing closer together.

Now, of course there are those that merely fly under false colors, without trying to reconcile the irreconcilable. We have the academics who get a frisson of excitement from the unwary and author learned treatises on astrology while denouncing those that would be so irrational as to actually practice it. We have the bogus granting of "degrees" by schools of astrology, aping the academics.

It saddens me, however, that we cannot see how corrupt and empty the American system of "education" is. Traditional astrologers are very lucky that Kepler College did not succeed because it might well have taken us down the wrong path. We need to structure our teaching in a traditional manner so our student really do learn traditional astrology, not in some stripped down, twisted, expensive distortion as part of the American dis-education machine in the atheistic/materialist establishment.

I have a very spiritual friend that was a wandering hippie in the 70s. He never went to college and only eventually got his GED. Nevertheless he is one of the most educated and erudite people that I know. People regularly mistake him for a professor of English or Literature, but he is so widely read that he taught himself. For myself, I am almost entirely an autodidact. In addition, I was extremely lucky to be able to study traditional astrology with a teacher who had both theoretical knowledge and was a very experienced practicing astrologer. This apprentice/master method is the absolute best way to learn and I am proud to take my place as first a student and now a teacher in the great Chain of traditional astrological education. Free your mind and the rest, will most certainly follow!
Posted by Christopher Warnock, Esq at 8:13 PM