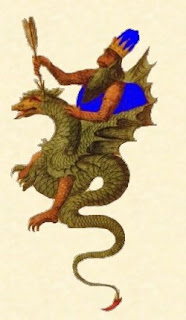 I had a post recently alluding to "full evocation to physical manifestation" This is one of the ideas bouncing around in contemporary magic and has come to mean that invocation of spirits isn't really complete unless they can be seen, heard, etc., physically.

I find it telling that our modern test of the efficacy and even existence of a spiritual being is its material manifestations. We have such an ingrained skepticism about the spiritual that unless we can touch, feel or see it, we question its existence. This again seems very natural, but is it a standard we even apply consistently?

When people ask me, "do you REALLY believe in astrology, magic, etc.?" I ask them in return, "Do you believe in atoms?" And that sounds like a nonsensical question to them. One believes, despite the sheer absurdity of it, in things like Santa Claus, the Tooth Fairly, angels and God. On the other hand, despite having never seen, heard, touched or tasted an atom, despite it being impossible to ever have anything but a second or third hand experience of an atom, we have no doubt of their reality.

So with atoms we have an underlying constituent of matter, invisible, only discernible second hand, but consistent with the modern atheistic/materialist world view. On the other hand, spiritual beings or the Platonic Forms, similarly invisible, discernible materially only second hand through their effects on matter, we doubt because the spiritual is incompatible with the modern worldview.

The modern view inverts this, the ultimate test of truth is the material. This accounts for the popularity of the 13th sign, aka the constellational Zodiac.

I don't doubt that it is possible to physically see spirits and for them to manifest materially. I personally haven't done this, though I certainly see spirits from time to time, in my "mind's eye". What I question is the idea that physical manifestation is the appropriate test for the success of an invocation and seemingly the point of invocation.

It is definitely useful to be able, as I did yesterday, to invoke the 3rd Mansion of the Moon, and have a huge amount of business. But, as Jason Miller recently noted in a post for his Sorcery class, if you want to make money you'd do better getting an MBA and going into banking than using magic. I've often thought that the material results of magic and astrology are like shiny baubles that an infant is attracted to and reaches for. It may get us started on the path, but the fact that magic and astrology really do work and what that means in terms of the nature of reality is actually more significant.
Posted by Christopher Warnock, Esq at 10:36 AM