Talisman? No, It's a Horoscope! 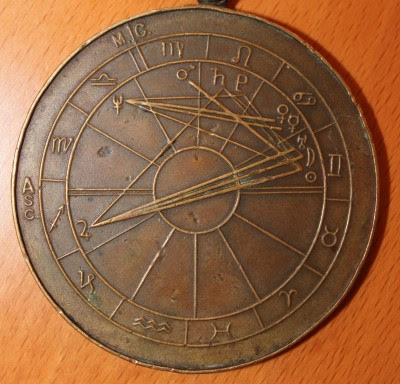 Because we specialize in astrological talismans at Renaissance Astrology, I often get e-mails from people with pictures attached asking me to identify talismans. Other than saying, "Well this looks early 20th century" generally I have no idea what the item is.

However, today I got an e-mail with the picture above attached. The person asked what kind of talisman it was.

Well, it's not a talisman! It is a horoscope! Likely someone's birthchart. Just for fun I decided to determine what the date was. I did this by starting with the slowest moving planet, since this chart is modern and includes Pluto, I looked to the signs it was in, Leo, so late 1940's, then I narrowed it down by looking at the sign each successively faster planet was in. So this is a horoscope for around Sunset on June 7, 1948.

So, finally one I could figure out, very interesting!
Posted by Christopher Warnock, Esq at 8:58 AM

This horoscope looked familiar when I first saw your posting. It struck me this evening that this is the chart of the Faculty of Astrological Studies:

The date is spot on and it was founded at 19:50, which is a little before sunset during British summer time.

Maybe these were made to commemorate some faculty event?

Oh, very cool! Thanks so much for identifying the chart and letting us know!