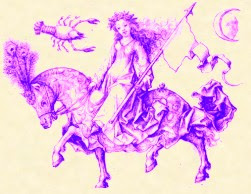 I had a poster ask whether having the Moon void of course was a problem in fixed star elections. Is the void of course Moon a big problem? Ok, this fits with my Mercury retrograde rap.

Basically my view is that modern astrology is 100% positive with the exception of Mercury retrograde and the void of course Moon, two imports from traditional astrology. Thus by themselves Mercury retrograde and void of course Moon have to represent all by themselves all the BAD STUFF in the Cosmos and thus are considered to be APOCALYPTICALLY BAD!!! Now certainly these are afflictions in traditional astrology, but not the only ones and not the worst ones either. The medieval astrology Guido Bonatti lists the void of course Moon as just one of 17 different possible afflictions of the Moon. Consideration 5 146 Considerations.

So what is the deal with the void of course Moon? The Moon typically shows action and connection and if she isn't making any aspects this is an indication of a lack of action, which may or may not be positive depending on the situation. If you want the status quo to remain in place, void of course Moon would be good!

When it comes to fixed star elections, the Moon is key. The Renaissance mage Cornelius Agrippa in his Three Books of Occult Philosophy explains how to make talismans of fixed stars,

"Now, the manner of making these kinds of rings [& talismans!], is this, viz., when any star ascends fortunately, with the fortunate aspect or conjunction of the Moon, we must take a stone, and herb that is under that star, and fasten it under that star and make a ring of the metal that is suitable to this star, and in it fasten the stone, putting the herb or root under it; not omitting the inscription of images, names and characters, and also the proper suffimigations..."

The key planet here is the Moon. As Picatrix says,

"And draw your attention to the Moon in all works [of magic] as if she were the chief of all the other planets because she brings about evident manifestations and judgments in all things in the world and it pertains to the power of generation and corruption and she is the mediatrix [female intermediary] in the advance of your work, receiving the influences and impressions of the stars and planets and pouring them out to the inferiors of this world.

So, in the context of fixed star elections, the whole key to the election is that the Moon is applying to conjoin (or in a pinch trine or sextile) the fixed star! Now normally fixed stars don't count as far as being void of course, but here the Moon is in direct contact with the fixed star thus the void of course effect, ie lack of contact, is hardly a problem.
Posted by Christopher Warnock, Esq at 7:58 PM