Algol: Respect the Sources & the Spirits! 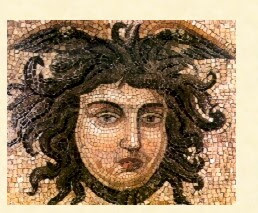 I had a post on my discussion group from a poster who had created an Algol talisman during what they called an "Algol transit" and then had left the talisman in a particular spot, rather than keeping it with them. They then suffered a rather spectacular series of mishaps and asked for my comments, which follow:

I really have no idea what an "Algol transit" is. A transit generally means comparing the position of a planet or other astrological factor with the current chart. This has nothing to do with the process of how you elect times for anything, including talismans. I think you are referring to Algol culminating???

More importantly, what's this about leaving the talisman somewhere? There are specific talismans in our sources that you leave in spots where you want them to take effect. Thabit Ibn Qurra in De Imaginibus, published as Astral High Magic describes a number of these talismans. However, generally they are also keyed to the rising sign or even rising degree of the intended recipient, whether for good or for ill.

This is the exception, however, with most talismans if you want a positive effect for yourself, you wear, carry or at least keep the talisman around. But what does Agrippa say about Algol talismans?

Under the head of Algol, they made an image whose Figure was the head of a man with a bloody neck; they report that it bestoweth good success to Petitions, and maketh him who carrieth it bold and magnanimous, and preserveth the members of the body sound: also it helpeth against Witchcraft, and reflecteth evil indeavors and wicked incantations upon our adversaries.

"and maketh him who carrieth it..." ie in modern English, "and makes whoever carries it, etc. etc."

So let's see, the election is probably ok, but we've got leaving the talisman somewhere when the sources say to carry it with you or at least have it around and we are dealing with ALGOL!!!! This is the Head of the Medusa, the fixed star with the absolute worst reputation, the most malefic of all. But, if treated respectfully puts all that malefic energy outwards against your enemies. Still without a doubt Algol is the worst fixed star to be messing about with. Algol is rambunctious even when you are respectful and follow the instructions in our traditional sources carefully. One effect and this I have experienced myself is that when you first start working with Algol he/she causes electronic problems and in particular interrupts your Internet connection. I had my electronic thermostat blow and my Internet mysteriously go down for 45 minutes the first day I used Algol. Others have reported that "weird" or "malevolent" looking people took one look and ran away when users worn their Algol talismans. Algol is most definitely the fixed star with the most obvious effects.

Very, very powerful spirit is Algol, but it looks like he/she does not appreciate having their talismans left lying about. No wonder you had trouble!

Folks, I can't emphasize how much of a mistake it is to start making stuff up and mixing and matching in the finest New Age style. You might be able to get away with basically disrespecting other astrological spirits or maybe the effects would be less obvious, but Algol is IN YOUR FACE! On the other hand we have had almost unanimously positive reports from those that got Renaissance Astrology Algol talismans and followed the proper election and ritual for personal consecrations.
Posted by Christopher Warnock, Esq at 7:02 PM

You know I am all about not keeping to the instructions, experimenting, and mixing it up a bit, but even I am shaking my head at this one.

Apart from the fact that Algol is not to be screwed around with, it is just the worst type of practice with ANY Fixed Star talisman. Taking a celestial talisman and than burying it or laying it on the ground like it was hot foot powder runs totally counter to the nature of celestial powers.

If they wanted to try and bury a talisman, should go with cthonic entities not celestial ones. Proper worlds and all.

Not necessarily! Our traditional sources do tell you to bury certain astrological talismans, Thabit Ibn Qurra, for example, in his scorpion repelling talismans (this can be adapted to all sorts of pests) says to "bury it in the middle of the place from which you wish that kind of creature to flee" De Imaginibus, Chapter 1.

I could have retitled this blog entry, "Respect the Spirits by Following the Sources"