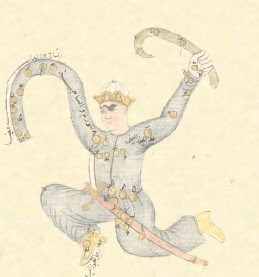 Folks, I wanted to mention that I have just added a new fixed stars page to my website. This is a section, translated into modern English, of the medieval poet John Gower's Confessio Amantis, that talks about the rulerships
of the 15 fixed stars.

"I have said elsewhere that down from every single star (so to speak Platonically) there hangs its own series of things down to the lowest...Under the celestial Serpent or the entire constellation of the Serpent-bearer, they place Saturn and sometimes Jupiter, afterwards daemons who often take on serpent's form, in addition men of this kind, serpents (the animals), the snake-weed, the stone draconite which originates in the head of a dragon, and the stone commonly called serpentine...By a similar system they think a chain of beings descends by levels from any star of the firmament through any planet under its dominion."

The confusion seems to have arisen from Ptolemy's Tetrabiblos where in Bk I ch 9 Ptolemy discusses the nature of the fixed stars and analogizes them to the planets for ease of understanding. For example, "The stars in the head of Aries, then, have an effect like the power of Mars and Saturn, mingled; those in the mouth like Mercury's power and moderately like Saturn's...." Tetrabiblos Robbins, trans at 47.

All Ptolemy is saying is that you can better understand the nature of the fixed stars which are less familiar than the planets, by understanding how they are similar to a particular planet or mixture of planets. The fixed stars are not exactly like the planets or under the rule of the planets. Even if Ptolemy says that a particular fixed star is like Saturn plus Mercury that doesn't mean that the fixed star = Saturn + Mercury or that it rules similar things or you can use Saturn or Mercury images for it or Saturn or Mercury ruled things for that fixed star. This is just a way understand by analogy roughly what the star is like. Each fixed star has its own nature, and in Hermes on the 15 Fixed Stars and in Cornelius Agrippa's Three Books of Occult Philosophy we have lists of the herbs, stones, sigils and particular properties of each star plus images and rulerships unrelated to their planetary nature.