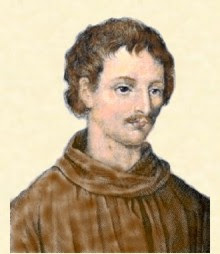 Giordano Bruno is a key figure in Renaissance philosophy and magic. A good start is my Bruno page. Bruno is a tragic figure really, Bruno was even more contentious than me and managed to get himself in arguments and difficulties wherever he went. He eventually ran afoul of the Inquisition and was burned at the stake. The Church regarded him as a heretic for his magical views, while moderns have somehow turned him into a "martyr to Science" truly ridiculous, given Bruno's actual philosophy and practice.

One of the problems with Bruno, for those seeking to follow in his footsteps, is the incredible range of his knowledge. For example, he combined the Art of Memory which we've already mentioned with the Ars Combinatoria of Ramon Llul. Each a whole lifetime's study unto themselves!

My personal interest has been in Bruno's magic of the psyche. It would confuse moderns a bit to call it psychological magic because they tend to think it's all in the mind.

Professor Ioan Coulianu discussing Bruno's psychological magic in his Eros and Magic in the Renaissance notes that magicians have not disappeared in the modern world, "...they have simply been camouflaged in sober and legal guises... Nowadays the magician busies himself with public relations, propaganda, market research, sociological surveys, publicity, information, counterinformation and misinformation, censorship, espionage and even cryptography..." Eros and Magic in the Renaissance, page 104.

The key texts for Bruno's psychological magic are

Eros and Magic in the Renaissance

Bruno Cause, Principle and Unity: And Essays on Magic out of print as a paperback but available in Kindle edition

A lot of structures built with astrology in mind has stood the test of time, such as the Mayan pyramid and the structures in Ancient Egypt. Quite mind boggling.