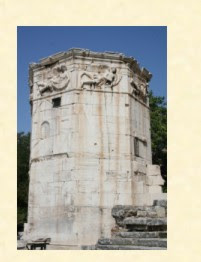 I added a new web page on the Tower of the Winds, an ancient building in Athens.

The standard modern view is that it was "scientific" you know a big utilitarian clock tower.

We tend to think of talismans as jewelry, as rings or medallions. In fact, De Imaginibus of Thabit Ibn Qurra clearly is talking about statuettes and many of the Picatrix Bk IV chapter 9 mansions images are also to be made as statuettes, often of wax. Certainly magic mirrors and swords, for example, are part of our traditional view of talismans, but almost anything, up to a whole city, can be created as an astrological talisman. These forces permeate all material things and if we pay attention orient us to the spiritual cycles and forces that underlie everything in the material world.

Now I'm reading "The Symbolism of the Christian Temple" by Jean Hani, and it remainded me of your post. It's incredible how in a traditional civilization every building, every decoration, even the smallest detail have a symbolic and ritual significance that imbues the building with the blessings and influences from Heaven.

Great post, for reminding us how deep traditional arts can be!