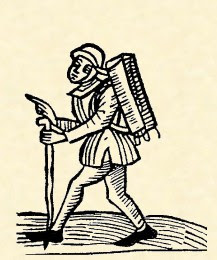 I received an e-mail from an astrological magician who was preparing to make the Venus in the first face of Pisces talisman from Picatrix Book II chapter 10,

"Of Venus. In the hour of Venus, Venus rising in the first face of Pisces, make an image to heal women from infirmities of the genitals and to gladden the sadness of men, and cure melancholy, and to take away bad thoughts and to have vigor and strengthen in sex, and in the first face of Taurus are made images to powerfully and miraculously bring about love and to have the good will of men."

Since no image was specified they asked whether to use a general image of Venus, eg

"...the form of a woman, holding an apple in her right hand and a comb in her left hand"

or the image of the first face/decan of Pisces

"There rises in the first face of Pisces a man with two bodies, who looks as though he is giving a gesture of greetings with his hands. This is a face of peace and humility, debility, many journeys, misery, seeking wealth, miserable life. This is its form."

Ok, very interesting question! Currently I am working on a decan/face mini-course so I have been rather absorbed in decan/face talismans. My first reaction to the question was that the images listed in Picatrix Bk II, ch. 10 are not really decan/face talismans as listed in Picatrix Bk II, ch 11 (Arabic/Western decans/faces) or Bk II, ch 12 faces/decans (Indian faces/decans) in the sense that there are specific planets that are given as ruling each face, in Arabic/Western traditional astrology, the rulership follows the Chaldean Order. Thus the first face of Taurus is ruled by Mercury and the first face of Pisces by Saturn.

The Picatrix Bk II, ch 10 talismans, on the other hand when they use faces, always seem to pick faces whose sign is ruled by or is the exaltation of the planet in question, for example,

"If, under the influence of Venus, you make the form of a woman, holding an apple in her right hand and a comb in her left hand, in white stone, the first face of Libra ascending, whoever has or carries the above image will always laugh and be cheerful."

In this case Venus rules Libra, though not the first face/decan of Libra, which is ruled by the Moon in the Arabic/Western decan/face system.

Also these talismans in Bk II ch 10 have purposes that fit the planet that rules or is exalted in the sign, but do not fit the face descriptions for that face. For example, 1st face of Taurus, says Picatrix,

"this is a face of plowing and working the earth, of sciences, geometry, of sowing seed, and making things. "

Similarly the first face of Pisces, ruled by Saturn,

"A man who has two bodies and is like he is going to salute with both hands. And this
is a face of peace and humility, of weakness, of many journeys, of misery, of seeking wealth, and the lamenting of one's manner of living."

So my first impression is that the general image of the sign ruler or exaltation ruler is appropriate for these Bk II, ch 10 talismans, rather than the face image.

However, I do note that Ficino says,

"For example, if anyone looks for a special benefit from Mercury, he ought to locate him in Virgo, or at least locate the Moon there in an aspect with Mercury, and there make an image out of tin or silver; he should put on it the whole sign of Virgo and its character and the character of Mercury. And if you are going to use the first face of Virgo, add in the figure which we have said has been observed in the first face..."

Thus Ficino clearly says to use the face image even though the first face is ruled by the Sun, not by Mercury.

I think now I would be more inclined to separate the sign and exaltation talismans that just happen to require face placement, ie Picatrix Bk II, ch. 10, from what I would characterize as the "true" decan/face talismans, ie Picatrix Bk II, ch 11 & 12. Still, given Ficino's example, I think therefore, that while I prefer using the general image for the bk II, ch 10 talismans, that the face images are a possible alternative.
Posted by Christopher Warnock, Esq at 3:06 PM