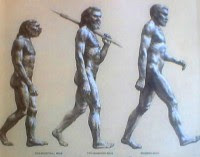 Moderns, even when they are consciously theistic, their unconscious base is the Modern World View. All of their automatic assumptions, their habits of thought and their picture of Reality rests on the post "Enlightenment" World View or World Picture which is materialistic and atheistic. This is the dilemma for all moderns that wish to follow a spiritual path or work in the spiritual arena, but do so with an essentially modern view of Reality.

We are so surrounded by the Modern World View that we cannot even see it as one way among a variety of possible views, for us it is simply Reality! Even if we reject portions of it it still exerts an incredible unconscious hold on us. Let me give a short summary of it.

A. Change from Renaissance to Modern World Views:

Methodology is recognition of only obvious and regular effects seen from a linear perspective that can be consistently obtained by anyone with a dismissal of subtle, irregular and non-linear causality that cannot be universally obtained.

Long process which begins with outward elimination of magical elements in religious rites and philosophical rejection of magic. Rejection of spiritual entities.

"Those who dare not say, 'There is no GOD', content themselves (for a fair step and Introduction) to deny that there are Spirits and Witches."

Protestantism, with minor exceptions, is the Royal Road to Atheism.

Nothing exists except Matter and Energy and they are equivalent (E=Mc2).

Mind, consciousness and emotions are a epiphenomenon, i.e. a byproduct, of Matter.

Except as they are determined by the physical attributes of things, events are random.

All events are meaningless except for the artificial and conventional meanings placed upon them by humans.

Myths in this context are not fables or fictions, but organizing principles of thought or archetypes. These myths are basic premises, held to be self evident.

Progress is the belief that the further one goes back in the past the worse the state of knowledge and thus the state of Man was. The method of improvement is Reason and thus the further in the Past one goes the more irrational Man was, while the further into the Future, the more rational Man will be. The ultimate goal of Progress is Technological Utopia, where advanced science and technology, created by Reason will allow all material wants and desires to be fulfilled.

The basic unit of the Modern World View is taken to be the individual. Each individual is considered to be equal to every other individual. The more Progress has taken place the more each individual exercises Free Will and individual Liberty using his Reason. The only legitimate mode of government is Democracy in which each free and rational individual has the maximum Liberty.

3. Physical Determination & Meaninglessness, The Higher Results from the Lower

The theory of Evolution, which is the general myth of Progress as it relates to Nature (?) posits that after the initial production of very simple life forms from non-living Matter, that all more specialized and complex plants and animals, including Man, came about through random mutation and natural selection. The physical makeup of an organism either corresponds to the physical makeup of its environment, in which case it survives or if it does not correspond, the organism dies and eventually the species becomes extinct. Thus there is no Fate or overriding plan, merely the unpredictable interaction of the organism, determined by its physical makeup, itself determined by its genes, and its physical environment.

Furthermore, just as all "higher" animals resulted from the Evolution of "lower", i.e. less complex animals, so morality, love, justice and other higher qualities are nothing but sex (Freud) the will to power (Adler) or the result of physical factors in Evolution.

D. The Successes of the Modern World View

Advanced Science, Technology and Medicine which allows for a high material standard of living and the maintenance of a huge and relatively long-lived population.

Meaninglessness, loss of ethical and moral basis, God is Dead.
Posted by Christopher Warnock, Esq at 11:23 AM

Love This. Great synthesis and exposition. Great clarity. Thanks!

Are you sure you're not speaking of the post-modern view?

No, the post-modern is a modern, i.e., non-traditional world view. It is just as based in atheistic-materialism.