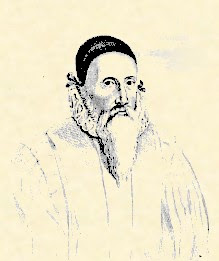 I just finished reading a short article by Richard Dunn, "John Dee and Astrology in Elizabethan England" which appears in John Dee: Interdisciplinary Studies in English Renaissance Thought (Springer 2006). Dunn discusses Dee's "new" astrology as propounded in his Propaedeumata Aphoristica (1558, 1568), the Monas Hieroglyphica (1564), and The Mathematicall Praeface (1570) and the actuality of his practice, which used standard traditional methods.

What I found somewhat amusing about it was that "modern" attitudes can be found even in the 16th & 17th centuries. In his Propaedeumata Aphoristica (1558, 1568) Dee provides a variation on Al-Kindi's rays as a mechanism for astrology and elaborates his own, new system of astrology based on this more mechanistic explanation. We can already see the pull of what the 18th century would term the "mechanistic philosophy" and Dee's own desire to invent his own system based upon it. All very modern!

This leads me to also make some comments on academic writing and secondary sources in general. We can start out by saying that taken in their best light that academic writing seeks to learn about things "objectively". This is to say, again in the best light, that one stands outside the subject and does not become personally involved with it. This perspective is held by academics to be the best methodology for learning about a subject.

To my mind, one really needs to combine both standing apart and entering into subjects, if one wishes to learn about them. Each approach has its advantages and disadvantages and the fullest knowledge arises both using both.

This is, however, being much too charitable with regard to how academic writing and research is carried on with regard to astrology and magic. In academia in general "objectivity" is fetishized into the only possible methodology, those that actual participate are "subjective" ie bad, and have "gone native" very, very bad. These attitudes reach a peak with the academic study of astrology and magic. Much energy and ink has gone into studying how it is that otherwise "rational" ie conforming to atheistic/materialist thinking, people could actually take magic and astrology seriously. Academics studying astrology and magic are therefore in the odd position of paying a great deal of attention to something that they must officially disparage as irrational and impossible. The fact that individual academics may, in their private lives, hold different opinions, is irrelevant because they will not be permitted, as academics, to publish or teach that astrology or magic exist.

Therefore, when we as practitioners read an academic source on astrology or magic we are not only getting at best the "objective" that is to say outside view, without the corresponding view from actual practitioners, but we are getting information from a source that is required to be officially hostile even to the existence of magic and astrology, let alone hostile to their practice.

Thus academic sources need to be used very, very carefully by the magical or astrological practitioner. My recommendation is that they be used only for the initial orientation within an area and for historical background. Despite the high prestige of academic writing and the subsequent attraction for us, they are the equivalent of trying to learn to perform the Lakota Sun Dance by reading only the writings of 19th century journalists and anthropologists, while refusing to speak to or read anything by a Native American on the subject. Perish the thought, where is your objectivity!

Now, I know that this is a somewhat unpopular view, but again, if readers disagree, merely stating your personal opinion without further support doesn't get us anywhere. I have cited from a Ph.D professor of religion at Princeton Unversity, published by the Oxford University Press, about as academically credentialed as one can get. If one wishes to argue that academia is accepting of the reality and practice of magic, one will need to cite similarly to a peer reviewed academic journal or a credentialed academic publishing in a university press. Mere, unsupported personal opinion isn't going to make it!
Posted by Christopher Warnock, Esq at 11:55 AM

Modern science and academia is not much different than the medieval Church when it came to an opposing religious points of view. Only the religion of science/academia is, as you say, atheistic materialism and God help anyone in their ranks who doesnt pay homage to that 'god'. Many of them risk losing their funding, their academic standing or even their jobs. There are, of course, exceptions such as a chemist who was a member of the astrological society that I belong to and he was open about it at work. They called him Dr Astro, but as far as I know, he suffered no other repercussions from his beliefs/interests. This is the exception rather than the rule, I'm sure.