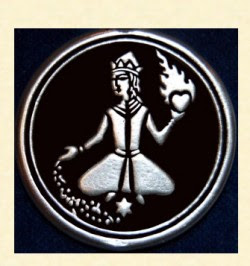 I am often asked if simply consecrating astrological talismans at an elected time is sufficient. After all, it is a big hassle to actually make them at an elected time! Wouldn't it be easier to just to forget all that? Well, it would be easier, but it wouldn't be authentic or anywhere near as powerful!

Israel Hibner in his Mysteries of Sigils [available only in the Renaissance Astrology Facsimile Edition] says,

Hibner advocates stamping, which is a good idea, but would require special equipment. I have used a diamond typped stylus and others have used a Dremel engraving tool. As part of the Renaissance Astrology team we have an experienced ceremonial magician/jeweler Wade Coleman willing to get up at 3am and do castings. You can see examples of his amazing work here:

Now Agrippa does mention assembly at an elected time,

"Now the manner of making these kinds of Rings, is this, viz. when any Star ascends fortunately, with the fortunate aspect, or conjunction of the Moon, we must take a stone, and Hearb that is under that Star, and make a Ring of the Metall that is sutable to this Star, and in it fasten the stone, putting the Hearb, or root under it; not omitting the inscriptions of images, names, and Characters, as also the proper suffumigations"


Note, however, that Agrippa has the mage assembling the ring at the proper time, but "not omitting the inscriptions"!

Now there are some possibilities for working with more than one elected time. Some talismans need to be made under multiple elections anyway.

"Whenever you wish to make an image and you wish to be in charge of a city or province or court or prefecture or be an overseer, everyone of these works is done in one way. Make fortunate the time when you begin to cast the image, and engrave the head of the image when the Caput Draconis (North Node of the Moon) is in the Ascendant, and the lord of the Ascendant is [dignified] and free from evil.

And engrave the body of the image when the Moon is in the Ascendant, and the Moon is increasing in light and is joined to fortunate planets.

Now another way to take advantage of multiple elections for a planetary talisman is to do the engraving in the hour of the planet. Simon Forman, the 17th century astrological magician, describes how a jeweler engraved a Jupiter talisman for him in just this fashion, working only in the hours of Jupiter. Notorious Astrological Physician of London Traister at 100-1.

The best way to start is with paper talismans which you can color in and add the proper sigils, characters and tables easily enough at the elected time.

While I know it is un-American and totally against the modern ethos for anything not to be easy, quick and simple, the truth is that there is no substitute for a proper election and making talismans by having them colored, inscribed, stamped, engraved or otherwise taking on their form at the elected time.

More on Astrological Talismans
Posted by Christopher Warnock, Esq at 11:13 AM

You have very good points. I really like your blog.