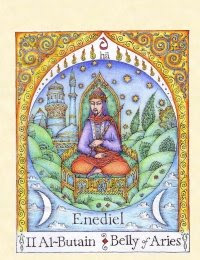 I got the following e-mail from a prominent ceremonial magician that I have been working with using astrological magic. I thought it was very interesting to see how they saw astrological talismans given their extensive magical background:

"So, one major project this year was to acquire, attune, and explore the powers of a full toolkit of astrological talismans.

I am now wearing *twelve* such talismans on a single silver chain. This is really, really powerful. The sensation is incredible.

Beyond this, over the past year, I've created about two dozen other (non wearable) talismans from clay, wood, wax, parchment, and other substances. The hard work (the elections) were almost entirely those of Chris Warnock, but the rituals were still frequently strenuous and potent. And these are pretty awesome too. But I am mostly giddy about the ones I am wearing.

The final rituals (for the pendant attunements) began two days ago, and were among the most terrifying and exciting rituals I've performed in a while. Almost immediately, a sudden wild wind began to blow outside like a switched had flipped, doors and windows rattled throughout the house, strange noises seemed to echo from the shadows which almost seemed like voices, something heavy and muscular slammed against the window of my ritual room as if trying to get in-- and then made unnatural growling sounds through the glass for several minutes. I'm three floors up. A sense of cold and terror began to saturate the ritual room, and it took a lot of willpower to keep my focus on the ritual and stay calm.


Anyway, I have developed some observations on these talismans and how they work, which I want to share for those who are interested in such things. These are only my *opinions.*

* These talismans do not operate quite like other magical objects. It is almost as if they are transmitting power on a different frequency, and it took me a while to adjust and detect any power coming from them. I noticed the effects on the world around me much sooner than sensing the power. Chris believes that astrological talismans use cosmic/macrocosmic power which is different from most other forms of magic, as they use personal/microcosmic power as fuel. I think there may be something to this notion. The talismans really do have amazing effects.

* The number of talismans worn simultaneously is significant in terms of numerology as well as quantity. Wearing twelve talismans is much more than the sum, in part because twelve is a perfect number-- especially in the context of astrology. Seven would also be a pretty great number. When worn on a silver chain, the talismans operate as a unit.

* Circular talismans seem to be stronger than square or oval talismans. There is some written material supporting this, somewhere or other, suggesting that this has to do with the shape of the soul being circular or spherical and that these also are perfect shapes. Nevertheless, I do notice a strong difference.

* Stringing the talismans in the closest approximation to the Chaldean order, not only makes sense in terms of being logical and tidy, but actually seems to boost the effects somewhat. Fixed star talismans seem to work best at one end, and Lunar talismans at the other. (I do not have any wearable House talismans, but I'd imagine those would follow the Lunar since they could be interpreted to having a terrestrial quality.)

* The most important talismans to wear, arguably, are the Lunar ones. Since we live in the SubLunar Realm, hers is the power which has the most immediate influence on us. All other stellar influence must pass through the Moon in order to effect change on Earth. She is the Mediatrix. She is like a lens or prism or mirror through which all the other starlight must pass. But there is another reason why this is interesting; strong Lunar talismans act as *huge* magic amplifiers. Also; those of you who get spooked by void of course Moon, strong Lunar talismans punch through them like they almost weren't there.

* Multiple talismans of a similar type seem to accumulate their effects. It isn't that the strongest one outshines the rest; they team up. I have five talismans of one particular planet, and the effect is really quite dramatic. When I had only two, it was much weaker.

* Astrological talismans are enhanced dramatically if fed hoodoo-style dressing oils periodically much like a mojo bag. This is not a huge surprise, but the effects blew me away on a couple of occasions. (And it's good to wear an undershirt, because the oil stains everything.)"

More on Astrological Talismans
Posted by Christopher Warnock, Esq at 10:00 AM