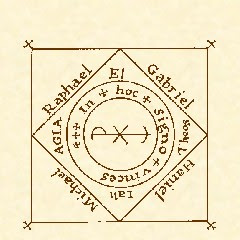 Questions on Fate & Magic and my responses:

Question: Having begun to study traditional natal astrology I have learned that if something is not indicated in your natal chart then you will not obtain it. But I don't understand if I'm not "supposed" to have something how can magic help me get it?

For example, a traditional natal delineation is not going to say, "You will receive $1,234,769.33 over the course of your life" it is going to say, "well you will generally have a middle class income with some big ups and downs" Thus you will never be Bill Gates rich. On the other hand think of a poker game. The expert can use the cards that are dealt him much better than the novice with the same cards. Choice, but limited by the circumstances.

Question: I believe that magic works but according to the law of Karma, if we deserve something it is given to us - in a way, we have already "paid" for it with being "good". And if we do not deserve it we don't receive it, for we have to pay for it first. And if we try to take something by force/magic doesn't it mean that we'll have to pay for it in present or future lives?

Answer: If one thinks in terms of karma (a good model, but not the only one) then everything you do, willed or not, deserved or not, ties you further into into Samsara, the wheel of life, death and rebirth. Even sattvic and good actions do so. Just sitting back passively does so. It is just that good actions get you a better rebirth and bad actions a bad one. Only gnosis saves you from the cycle of death and rebirth, not good works or faith or following some doctrine or set of rules.

That there is something inherently shady about magic is due to its dislike by organized religion, by the official "masters" of the spiritual. They are however, in the words of the Gospel of Thomas, dry canals, "The Pharisees and scribes have taken the keys of knowledge (gnosis) and hidden them. They themselves have not entered, nor have they allowed to enter those who wish to."

Magic is a method of working with the spiritual realm. It is a source of power and can be dangerous, but so is electricity. If wiring up a circuit box makes you nervous don't be an electrician!

More on Hermeticism: a Practical Path to Gnosis
Posted by Christopher Warnock, Esq at 10:02 AM

Hi, what is the name of the magic circle in the drawn ? It has the names of Michael, Raphael and Gabriel, which are usually called in the quarters in Golden DAwn material, but the last one is different, Hanael...