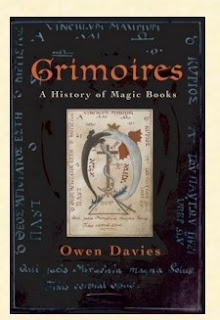 In getting ready for the Picatrix launch, I was idly searching and popped up a few pages on Picatrix in a book I had never heard of, Grimoires: A History of Magic Books by Owen Davies. Davies is an English academic who wrote another book I enjoyed, Popular Magic: Cunning-folk in English History. So I thought, what the heck! Get a used copy and read about Picatrix.

Well, I was very surprised because "Grimoires", while it is a very good survey of magical books in the West from the Middle Ages to the present, actually is much more, the best one book study of esotericism in the West I have yet seen.

And here's why. In "All the President's Men" the source Deep Throat says, "follow the money" because that's how all of the seemingly disparate secrets are connected. When it comes to astrology, alchemy, magic and esoteric knowledge in the West, it's follow the book, or rather the books! In the East there are traditions that have continued their oral and direct transmission of wisdom and technique until the present day. In the West oral transmission essentially ceased and the esoteric traditions of the West from the Middle Ages onward have been heavily literary, dependent to a great extent on learning from books. Therefore, when you trace the history of grimoires, books of magic, as Davies has done, you can see the
importance of magic books.

I was particularly taken by the incredible notoriety of DeLaurence, who I'd always taken as a plagiarist and publisher of pulp [Davies has a whole chapter called Pulp Magic!] In South America, in the Caribbean and especially in Jamaica, DeLaurence became notorious and the possession of his "Sixth and Seventh Books of Moses" the key to magical credibility. Amazingly enough I encountered this personally recently. I shipped a talisman to Jamaica recently and of course included my usual instruction booklet. The talisman was confiscated by Jamaican Customs! When I checked the Jamaican Customs regulations I found that there was no restriction on jewelry, but that magic books published by DeLaurence were specifically banned in Jamaica. What a synchronicity! Particularly since Davies mentions the Jamaican Customs regulations in his book.

I'm reading this and saying, "Why haven't I heard of this book before?" Well it was only published in 2009. Excellent, really excellent! This is exactly what an academic study is useful for, placing things in historical perspective. Definitely extremely useful and worth getting!

Here is a link to Amazon for Grimoires by Davies.
Posted by Christopher Warnock, Esq at 7:48 PM