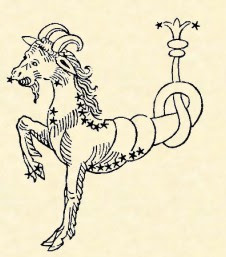 I got what I call a rabbit hole question asking me about house protection talismans. It seems like a small question, but when you explore it it keeps expanding.

I thought, well let's see what our traditional sources say, surely there must be house protection talismans? I look through Picatrix, Agrippa, but no! The closest we have is Deneb Algedi, in Hermes on the 15 Fixed Stars,

"said gives grace in causes, brings peace to houses in which it is, preserves its bearer always from harm and removes discords."

However, the JF translation of Agrippa says of Deneb Algedi,

"Under the tail of Capricorn they made the image of an Hart, or Goate, or of an angryman; it bestoweth prosperity, and increaseth wrath."

Let's look at the Latin critical edition which speaks of,

The image of a stag or he-goat or angry man which gives prosperity and augments prosperity [alternatively lengthens life]."

As is typical, whenever there is confusion it is in the JF translation, not the original Latin.

So, Deneb Algedi it is!

But perhaps we can do something extra here, a combo fixed star/house based talisman?

Here is an interesting election for this talisman, 1:05-1:30 am CDT, August 14, 2010 for Iowa City, IA. We have Deneb Algedi culminating, right on the Midheaven at around 1:18 am CDT at 23 Aquarius, with some space on either side to start and stop making the talisman and doing the consecration.

The Moon trines Deneb Algedi and in this case we throw in the Ascendant ruler Mercury who is dignified by sign and exalted (I don't give Mercury in Virgo full sign + full exaltation dignity, he seems more like +6 or +7 really). He is in the 4th house of the home, though nearing the end. The 4th ruler of the house is the Sun dignified by sign and the Moon also sextiles the Sun. Nice!

So, thanks for the question, I really started falling down the rabbit hole on that one. Due to our busy August casting schedule we can't cast silver talismans on that date, but we will cast Deneb Algedi talismans in September! If I get enough interest, e-mail me at chriswarnock@renaissanceastrology.com I will make small Deneb Algedi mirrors either at this August election or in September. Cost would be $69.95 plus shipping.

Of course you can always make your own talismans, adjusting the election to your location using a chart, not time zone adjustment. Put the sigil of Deneb Algedi on it, plus the Sun and Mercury and invoke the spirits of this star and planets.

Ah, good to know. I made a Deneb Algedi talisman last year, and it has certainly been peaceful at home where I keep it.