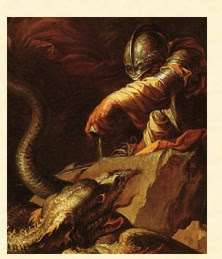 I had a question asked recently about images of the planets in all their dignities and debilities to be used for meditation and contemplation. The easy answer is that we have a lot of image descriptions, but not a lot of actual images. Basically we have woodblock images of the 360 degrees and 36 faces from Johannes Angelus, the incomplete face/decan murals in the Schifanoia Palace, some cartoonish images in Pingree's Latin Picatrix and Nigel's work.

In addition, the concept of doing planets in signs and as a meditation is not how our traditional sources worked. Firstly they are generally doing images in order to create talismans, that is to say, in order to invoke a particular astrological spirit or spirits. This could be for practical, magical purposes or more devotional, but in either case they were thinking more about the requirements of an external spirit, rather than internal meditation. The only explicitly meditative image I know of is from Ficino's Three Books on Life where he discusses construction of a model of the Cosmos, either as a sort of armillary sphere or as a painting on the inside of the walls and ceiling of a room, "You will, however, fashion a better image within yourself..." Three Books on Life Bk III, ch 19 Kaske & Clarke, p 347.

Secondly, we do have images of the planets in their dignities, for example, the Sun in Leo and in Aries from Agrippa,

...they made an Image at the hour of the Sun, the first face of Leo ascending with the Sun, the forme of which was a king crowned, sitting in a chair, having a Raven in his bosom, and under his feet a Globe; he is cloathed in Saffron coloured cloathes...They made another Image of the Sun in a Diamond, at the hour of the Sun, it ascending in his exaltation; the figure of which was a woman crowned with the gesture of one dancing and laughing, standing in a Chariot drawn with four horses, having in her right hand a looking glass, or buckler, in the left a staffe, leaning on her breast, carrying a flame of fire on her head;

But as far as the planets in the debilities, there are a couple of problems. First in terms of talismans, these are curse talismans, like the Rats Begone! Talisman. This accounts for why our sources don't even list images for say Saturn or Mars in detriment. Going further with this, the image of Saturn in detriment would not be something that you would want to consecrate and thus energize and ensoul since it would start putting out negative vibes. Indeed, Picatrix, after discussing an image of Saturn for discord, made when in his hour, when he is rising, thus not even afflicted, says, "Be careful not to carry this image with you." Picatrix Bk II, ch 10, Greer & Warnock, Complete Picatrix, page 106.

We should consider further that to meditate on an image is a method of consecrating it, but with the further effect of strongly stirring up the celestial spirits and energies that lie within us as well as increasing our connection, through our spirit & soul to the World Soul and Spirit (Anima & Spiritus Mundi). To be filled with the energy of a dignified planet is generally positive, an afflicted planet, however, is another story. Picatrix says of Saturn for example, that he signifies,

When he is retrograde, however, he signifies misfortune, debilities or infirmities, prisons and evils suffered in all things, and if he enters into aspect with any other planet, he weakens it and damages all the qualities of the other planet. If he is retrograde and you ask him for something, what you seek will come about with delays and miseries and great labor. If he is retrograde in any of his dignities, his maledictions are augmented and increased; while if he rises in his powers and dignities, then he will be easier and gentler.

This reminds me of a decision I made awhile back with regard to psychological profiling. I found this to be an interesting and unusual modern method of synthetic reasoning, most typically used for tracking serial killers by trying to understand their psychology and motivations, to get into their heads. Having had just the slightest exposure I realized that I would be exposing myself to the most negative possible influences, what medievals would rightly consider demonic, and that was not a good idea! It is too easy to fool oneself into thinking that this is study, when it is in fact stirring up evil, both internally and externally.

And ultimately, this is a problem with curses and malefic magic. While the ostensible focus is external, the mage cannot help but be affected by the forces they are invoking. Look at what happened to me with the rat talisman.

I am not advocating that we be ignorant of evil, or that malefic energy and malefic planets should be forbidden and beyond the pale. But as the Centiloquium attributed to Ptolemy so rightly says, the malefics are like poisons, and while capable of being used for healing, we must still remember that they are dangerous. The idea of meditating on the planets in all of their dignities and debilities is an interesting one, reminiscent of Ficino's Cosmos image, but we need to have a healthy respect for spiritual energy, both benefic and malefic and realize that we are connected to, and affected by, everything that we see, do and think.
Posted by Christopher Warnock, Esq at 1:55 PM

That was a really interesting post; and kind of scary for professionals in the FBI who deal with profiling and this type of 'energy' on a daily basis. I stopped watching the TV show Criminal Minds about a year or so ago because I couldn't stand the sick, twisted scenes of torture and violence. I always felt depressed after the show and thought, this isn't entertaining, why bother watching it anymore; though I have (normal)friends who love it. Whatever.....