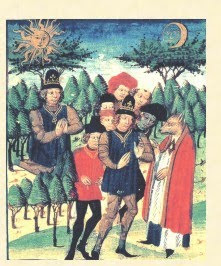 Picatrix provides, in Bk II, chapter 5, a very interesting talisman using the power of a special type of number,

An image for enduring love. Make two images, and put one of the Fortunes at the ascendant and the Moon in Taurus conjunct Venus. Write on one image a number – that is, a figure of al-Khwarismi, the sort that begin with 0 -- for 220 in the proper place, and on the other image write the same kind of figure for 284 in the proper place. Join the two figures together in an embrace, and then there will be perfect and lasting love between the two.

We have a very interesting addition to this in Picatrix, Bk III ch 11 giving us more practical examples of how to work magically with these numbers,

The one who first compounded this stone by his own labor was King Behentater, who was one of the kings of India, and a great sage. It was he who built the city of Manif, in which he built mighty buildings, and in those buildings constructed images that spoke. He it was who discovered how to use numbers to make computations for love, which is one of the great wonders the Hindus have. When two people were given these numbers in food or drink or in any other manner, they became great friends and well pleasing to each other. If the aforesaid numbers were carved in wood, and bread or anything else edible was sealed with them and you gave it to someone to eat, he will delight in you with a great love. If those numbers are written on your clothing, your garments cannot be taken away from you; and if you write them on banners that are put in the street to draw business, they will draw business to you.

The lesser of these numbers is 220, and the greater is 284. The way to use these numbers is as follows. Write the smaller and the larger number in the figures of al-Khwarismi. Give the lesser in food to whomever you wish; you should eat the larger. The one who receives the smaller will be obedient to you as the lesser is obedient to the greater, and you will be delighted by him because of the marvelous property and power of the aforesaid computations. These computations may be done similarly with raisins, and pomegranate seeds, and eating whatever other fruit you wish. This is done by the number, and not by the figure. I have experienced the aforesaid computations many times, and have found truth in them as narrated above.

Picatrix explains to us, " Magic is difficult to understand because it uses connections hidden from our senses and our sight. This is because these connections are divine powers placed before things to lure them upwards...By sages magical images are called talismans...To work victoriously he makes [talismans] with mathematical proportions and influences and uses celestial writing." Picatrix Bk I, ch 2.

While in one sense astrology depends on mathematics because of the calculations necessary to plot the position of celestial bodies, in a deeper sense astrology and astrological magic work because of the spiritual correspondence and sympathy of all things, which can be seen quite clearly in mathematical ratios and relationships. Here the amicable numbers, perfectly acceptable mathematically to moderns, fascinated our illustrious predecessors who discerned the true magical nature of reality though the relationship, which they saw as love, between these numbers. Once the underlying relationship is seen, the practical magical and talismanic use becomes obvious!

What treasures await us in Picatrix! What knowledge so long hidden, lost for three centuries, is soon to be revealed to us!
Posted by Christopher Warnock, Esq at 7:02 PM

.....I can't wait to get started learning from you, Frater. Excellent post.