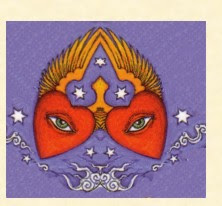 Boy, it just doesn't stop with the sidereal[sic] onslaught. I had a poster quoting my Mansions webpage about the Sun and the ecliptic being like the Moon in her Mansions and demanding to know how I could use the Tropical Mansions. Too bad they didn't bother to read the next section!

This raises a bigger point however. Part of the problem with the onslaught of the sidereal[sic] Zodiac is that it obscures thinking about the question of choice of Tropical versus Constellational placement of various astrological factors.

Traditional astrologers used the Tropical Zodiac which is oriented to the seasons, but they did precess fixed stars, how about that? This is just more ammunition for a general attack on the use of the Tropical Zodiac if we don't think carefully about it.

Let's think about Arabic Parts for a second. Arabic Parts, the most famous being the Part of Fortune, do not represent actual, material bodies. They are derived from the Zodiacal longitude of 3 points, often the distance from one planet to another then projected from another point. For example the Part of Fortune is the distance from the Sun to the Moon or Moon to the Sun, depending on whether it is day or night [I've probably got those switched, but this example doesn't depend on it] projected from the Ascendant.

But, what's going on here? Where are the beams, rays or fields from something "actual" that MUST be causing astrological effects. Whoops! There aren't any. What we are seeing is that the Arabic Parts expose the deep patterning and unity of the Cosmos, rather than the "actual" position of a material body.

Let's think about the fixed stars again. Yes, traditional astrologers do precess their Zodiacal longitude, but unlike the planets who are all basically orbiting in the path of the Sun, the ecliptic, the fixed stars are placed all over the 3D sphere of the Heavens. We project them from this 3D "actual" position on to the flat 2D Zodiac thus severely distorting their position unless they happen to be placed near the ecliptic. But the traditional method of fixed stars works! They actually accurate predict and ensoul talismans even though their "actual" position is not being used. How can this be?

In point of fact, like the Arabic Parts, the fixed stars are revealing deep underlying patternings, not apparent from their "actual" placement.

Crazy to the atheistic/materialist, but just plain common sense to the Hermetic/Neoplatonist!
Posted by Christopher Warnock, Esq at 5:33 PM