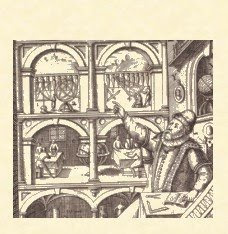 I was asked recently if the discovery of the outer planets, new stars and even planets revolving around stars did not pose serious problems for traditional astrology, based as it was on 7 planets and the sphere of the fixed stars?

Many of the ancients did see the geocentric Ptolematic astronomy with the Earth at the center and the 7 planetary spheres extending out with the 8 sphere of the fixed stars as the outer reach of the Cosmos as an accurate depiction of the physical universe.

However, we need to be careful not to fall into seeing history through the distorting lens of the archetype of Progress, in which the further we go back into the past, the less advanced people were and the further we go into the future the more advanced, knowledgeable and evolved we are, until we reach 21st humanity, clearly the height, the peak of perfection!

There was a rather materialistic, what might be termed "scientific" strand of astrology which focused on natural magic and was epitomized the Al-Kindi's On the Stellar Rays.

On the other hand, there also existed a second path which attempted to glimpse through the veil of the Material into the comprehensive patterns and Divine Ideas that underlie it. This path followed the invitation of the Ihkwan al Safa, the mystic Islamic brotherhood,

Will you not choose, oh my brother, to enter the Temple of [Hermes Trismegistus], in order to contemplate the heavens of which Plato spoke, spiritual Heavens, not the visible heavens shown by the astronomers?

Encyclopedia of the Ihkwan al Safa, cited in cited in Henry Corbin, "Sabian Temple and Ismailism" Temple and Contemplation (1986) at 137.

If we think of Agrippa's Three Books of Occult Philosophy which mirrored the three worlds of the Divine Ideas/Archetypes, the Material World and the Intermediate World, the Intermediate is often termed the Celestial World. Again there certain was the belief that the stars and planets were not made of the same matter as the Earth, in the "scientific" strand of astrology. But the spiritual path was never particularly concerned with matter, for this strand, the Intermediate World was perhaps best exemplified by the Alam al-Mithal, the World of Images, where the Divine Ideas took on form and matter lost its materiality and became only form. We visit this realm in dreams, at least those dreams that do not arise solely from our personal unconscious.

That the material Universe extends far beyond the vision of earlier astronomers, is less of a problem when one's concern is not with the physical bodies of the stars and planets, but with their souls, the planetary Intelligences and the reflection of Divine Ideas in material manifestation. As Plotinus says, "Let us suppose that the stars are like characters always being written on the heavens or written once for all and moving as they perform their task..." Ennead II, 3.

In the 21st century we may know a great deal about stars 1,000 of light years away, but we know almost nothing about our own souls. Surely our predecessors would feel that we have made a poor bargain.
Posted by Christopher Warnock, Esq at 6:52 PM