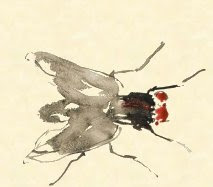 Here is a translation of the Latin Picatrix, Bk II, ch. 10

Here is the corresponding image from the Ouroboros Picatrix,

Furthermore, carve a picture of the head of a zebra with the head of a fly
on it on a granite stone. The head should be a little oversized. This
ought to be done in the hour and Venus is ascendant. The stone is used to
stamp wax for increased productions. This has been successfully
experimented in labyrinths[????].

(1) the stone alaquech does appear to be carnelian. The Lapidary of King Alfonso X the Wise, ed. Bahler & Gatto (UPressSouth, 1997) at 187 talks of the stone called in Greek alaaquic and in Latin cornelina and identifies this as carnelian.

(2) azeberi, Ouroboros identifies this as a zebra, which is certainly possible. However, I note that one etyomology of zebra indicates that the word comes from zevra or zervo, Old Portuguese for wild ass. Given that Picatrix was written in A.D. 1000 I think that wild ass is probably more plausible.

(3) Some of the problems with the Ouroboros translation are evident from the passage quoted above. Clearly the election calls for the hour of Venus and Venus rising, yet this is not clear from the translation. The section about increased productions is obscure and the one about experimentation in labyrinths makes no sense at all! Perhaps there is a connection in Arabic between labyrinth and the labyrinthine twists of the intestines?
Posted by Christopher Warnock, Esq at 4:50 PM