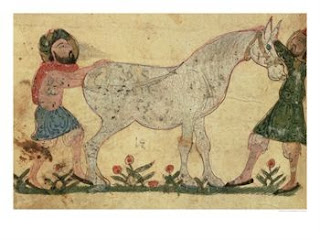 Here is an example of an election using the methods set forth in
John Gadbury's 1691 Nauticum Astrologicum, which is a book of horary and electional astrology for ships. He discusses the three methods of doing elections and gives examples. This chapter is included in my

Here we would use the natal chart of the mare, but this information is not available. Since we don't have a natal chart we proceed to the next method which is to use a horary question. Use the same procedure as above if the horary is favorable. If the horary is unfavorable make fortunate the factors that were unfavorable. Nauticum Astrologicum, p. 23-4. If we didn't have either a natal chart or horary, we would try get the most favorable electional chart. Nauticum Astrologicum, p. 30-1.

Here is the horary:

In this chart Aquarius rises and it is Saturn hour. As Saturn is the ruler of Aquarius the chart is radical and has initial signs of accuracy.

As Aquarius rises, Saturn is the significator of the querent. Saturn is in detriment and retrograde in the 5th house.

Now since we are asking about the pregnancy of the mare and not the querent, we turn the chart, the 5th (offspring) of the 12th (mare) is the 4th house.

The ruler of the 4th is Mercury who is in the last degree of Sagittarius and about to go from being in detriment to being peregrine. The Part of Fortune is in the 4th. Mercury applies to conjoin Venus.

My sense of this chart is that it is indicating that conception is possible, but that a miscarriage would then ensue. Also possible, due to the afflicted state of the mare is no conception.


Here is the election for breeding the mare, based on the previous horary.

As I don't have the proper location I have used Washington, D.C. as an example.

In this chart, since this election is for the mare, the mare is signified by the first house and it's ruler Venus. Venus is exalted in the 5th house of offspring. This is, "a strong argument of...issue" Lilly, Christian Astrology 222. Venus is in Pisces, a fertile sign. The Moon is also in Pisces and conjunct the 5th house cusp, similarly a positive sign.

The South Node, while in the 1st, is close enough to the 2nd to be conjunct it, so this assists the mare as well, getting the Node out of the 1st house.

Whew! That was difficult! I looked at over a hundred charts to get this one. Really shows the absolute necessity of having a computer to really be to look at the full range of electional choices.

Not a bad election, and I managed to include some factors from the horary in it! I was going to go on and do a pure election just based on getting good factors, but this one is pretty good.