As Golf is to Miniature Golf.... 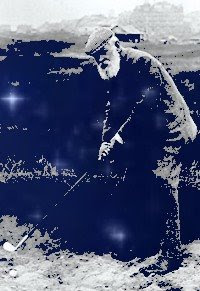 As a graduate of the University of St Andrews, I am often asked if I played golf there, St Andrews being the home of golf. While I didn't I certainly did learn a bit about the origins of golf, which dates back to the Middle Ages in Scotland. One of the most interesting things about it is that the original golf course, the Old Course at St Andrews, is just laid out right on the Scottish seaside. No massive, artificial landscaping, the bunkers, ie sand traps, are just that sand from the dunes. If you've ever seen the movie "Chariots of Fire" you can see what I mean as the opening sequence is running on the West Sands of St Andrews and then across the edge of the Old Course, past the Royal and Ancient Golf Club into the ancient city of St Andrews. And of course, golf has a long history, is quite complex to really learn, and takes great expertise to truly master.

And then we have miniature golf. According to Wikipedia, miniature golf aka "mini-golf, midget golf, goofy golf, shorties, extreme golf, crazy golf..." had its origins, not suprisingly at the Old Course in St Andrews, but its biggest expansion after the Depression when it took on its familiar form with the astroturf, windmills, bobbing dinosaurs, etc. While there are apparently professional miniature golf tournaments and such, it remains predominately an amateur amusement played with a single club, the putter on tiny courses.

Hmmm...two paragraphs and I still haven't gotten to astrology yet. Well, dedicated readers can probably see that I am laying out an extended metaphor. To my mind golf is to miniature golf as traditional astrology is to modern astrology.

We can think of the 14 clubs of golf like the many and varied techniques of traditional astrology, perhaps the woods are horary, irons are electional, hybrids, mundane and putter, natal astrology. This fits nicely since miniature golf only uses a putter and modern astrology only uses natal. This metaphor could probably be spun out endlessly, eg the extended length of a golf course versus the cramped quarters of miniature golf = the wide reach of traditional astrology and the limitation of modern astrology to psychology.

But let's throw in some illuminating differences. To really fit the traditional is to modern astrology metaphor, miniature golfers would have had to have forgotten that miniature golf had its origins in golf, not even known that golf existed or dismissed it as an earlier and obviously inferior form of miniature golf. In fact, they would think that they were true "golfers".

Occasionally miniature golfers would have wandered out onto largely abandoned golf courses. Knowing that "golf" can only be played with putters they would have tried to play par 3, 4 and 5 holes with little success, ala trying to predict with modern psychological natal astrology.

The key change, however, would be that many miniature golfers would have thrown out the golf scoring system. Counting strokes, like making predictions, would be taboo and what was the heart of golf, like traditional astrology, would be banished from miniature golf, as prediction has been from modern astrology.

Hmmm...that really does seem ludicrous, whacking around 18 holes with just a putter and refusing to keep score while being utterly convinced this is how Tiger Woods did it. Well, welcome to traditional astrology in the modern world!

More on Traditional Astrology
Posted by Christopher Warnock, Esq at 10:11 AM

Ha! I love this. My usual analogy tends to be about fine cuisine vs. fast food - "Imagine if you thought that fast food was all there was to eat, and that that was as good as it gets. Sure, it's *related* to actual cooking. Some of the ingredients and even some of the methods are the same. But..." Hmm, perhaps this deserves a post of my own. Fore!