Numbering the Degrees of the Zodiac 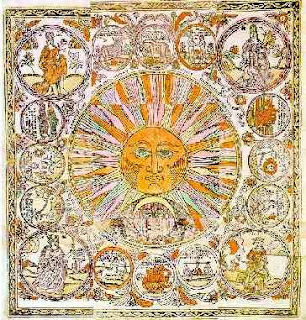 I had a question on my discussion group asking whether one should round off to the nearest degree, when considering the degrees of the Zodiac.

Let's talk a bit about the the Zodiac. The Zodiac is a circle, composed, as circles are, of 360 degrees. It is divided into 12 signs, corresponding to the 12 constellations that lie in the ecliptic, the path of the Sun. Each sign, therefore, is composed of 30 degrees. Each degree is subdivided into 60 minutes and each minute into 60 seconds.

Degrees are like your birthday, you don't round them off. No matter how close you are to be 25 years old, even on 24 years and 360 days you still refer to yourself as 24 years old!

Normally nowadays, if we are at 1 degree 37 minutes, we tend to call that "1 degree". Be careful not to confuse this with the "first degree"

Just like the numbering of centuries. It is 2009, but we are in the 21st century
Posted by Christopher Warnock, Esq at 10:26 AM