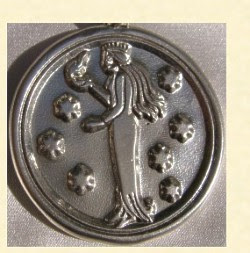 I want to expand a bit on the use of "malefic" talismans. Let's look at the fixed star Algol as an example. Vivian Robson in Fixed Stars and Constellations in Astrology (admittedly a modern source but with a lot of good traditional material) says of Algol in a natal chart, "It causes misfortune, violence, decapitation, hanging, electrocution and mob violence, and gives a dogged and violent nature that causes death to the native or others. It is the most evil star in the heavens." at 124.

However, as a talisman Algol, "gives animosity and audacity, guards the members [of the wearer] and makes victorious over what you wish." Hermes on the 15 Fixed Stars. Silver Algol Talisman

This at first seems paradoxical, how a "bad" talisman be good? Firstly, it appers that one use of malefic talismans is to direct that "bad" energy outwards away from you as protection. This certainly fits what Hermes on the 15 Fixed Stars says, plus I have been getting pretty consistent reports about how the Algol talisman works. Algol is described as "a bulldog" and you go through an initial stage where he is rather rambunctious. The day I put my Algol talisman on my fixed star altar my electronic thermostat went blooey! and my Internet connection inexplicably went out. However, once this initial stage is over, people describe Algol uniformly as the most powerful protection talisman they have ever dealt with, actively going out and neutralizing threats to you.

This initial stage of problems is also not surprising giving that indeed we are dealing with a malefic talisman, note that Hermes says the Algol talisman gives "animosity", so along with the very powerful benefits we have some problems. Malefics tend to be like that in horaries or natal charts, since even when fully dignified and thus capable of providing benefits they always seem to have a bit of an edge. I have Saturn in Aquarius, his sign and triplicity, but still get a certain amount of Saturnine melancholy.

Finally we have the issue of inconsistencies among our sources. Robson says of the Pleiades star cluster, "They are said to make their natives wanton, ambitious, turbulent, optimistic and peaceful; to give many journeys and voyages, success in agriculture and through active intelligence; and to cause blindness, disgrace and a violent death. Their influence is distinctly evil and there is no astrological warrant for the oft-quoted passage Job (xxxviii. 31) "Canst thou bind the sweet influences of Pleiades…?" which is probably a mistranslation." at 182.

Yet Hermes on the 15 Fixed Stars says the Pleiades talisman, "protects the light of the eyes, gathers daimons and spirits of the dead to come and speak and makes [the wearer] to know of secret and hidden things."

As you and Paracelsus said before, it's the dose that makes the poison.

It's also the way it's used. Aspirin may be great for mild headaches, arthritis, and as a mitigation technique for heart failure, but it's not so great for kids with fevers. It's aspirin, no matter what you use it for. The Pleiades represent the same force regardless of whether it's a force directed by a talisman or a force manifesting in someone's life as revealed in a divination. The manifestation nof the force will be different in different contexts, sometimes good, other times not good. Understanding the difference requires study and skill, but mostly experience.

I am a student of John Frawley's and love his work; but in one of his books he condems the invoking of planetary spirits etc. I assume this is because he is a practicing Roman Catholic.
I am a practicing Episcopalian (anglo-catholic tradition) and really dont see how what you do here is any different than praying to saints or angels for intervention and help. The only difference is that religious medals were not made nor consecrated using Astrology or astrological magic. Any thoughts on this?

I 'had' a Spica talisman in my wallet, but one day discovered that it was missing. I have no idea where it fell out. I hope some deserving soul found it and is benefiting from it; although it's probably due to be 're-charged' with another consecration. ;-)
Gary (NJ)