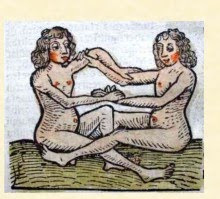 When I first started doing traditional astrology over a decade ago, I was constantly having to defend the use of traditional techniques. One favorite area of attack was the use of the outer planets, ie Neptune, Pluto and Uranus (urinous, you're anus? I've heard it pronounced Ouranos to avoid that whole mess). 500 separate posters seemed to be under the impression that they had come up with this great idea on their own, "Hey, if there are more planets, asteroids, comets, etc., you HAVE to use them!"

I've been very pleased to see the number of traditional astrologers grow along with knowledge of traditional technique and the constant barrage of "Uranus, Uranus, Uranus" has died off. However, a new and sinister astral red herring is rearing its anus, the SIDEREAL [sic] ZODIAC!!!!!

The hoof beat of the sidereal herd became so thunderous recently that I had to write a whole web page on the subject of the Tropical, Sidereal and Constellational Zodiacs. I thought that this would be sufficient to fully articulate my views, which are, as much as possible, simply an expression of what traditional astrologers would have said on the subject. Unfortunately, this is turning out to be about as effective as lecturing lemmings as they swarm into the proverbial abyss.

Just this week I got a call from a fellow that wanted me to read his "sidereal" chart. When I informed him that I was a traditional astrologer, he informed that the Tropical Zodiac was "wrong". I asked him if he had read my Zodiac webpage, that was "wrong" too because, and I actually am quoting what he said, "They were uneducated after the fall of the Roman Empire, they were using the Roman numerals, not the Aramaic numerals. Once there were the Crusades then they used the Aramaic numerals!" I am not kidding about this being an exact quote. Needless to say, I did not take this particularly well, which flabbergasted the fellow. "Gosh, I don't know why you are so defensive, can't you see that you are completely wrong?", stateth he.

So this is fair warning folks, don't contact me and ask me why I foolishly insist on using the Tropical Zodiac! Don't stick your hand in the cage on that one since you'll be the 500th caller. My views, and as much as I could, the views of traditional astrologers are laid out at my Zodiacs page

If you are drawn to using the Sidereal Zodiac, by all means do Vedic astrology or be a modern, if you are drawn to the Constellational Zodiac, be a modern, but you cannot be a traditional astrologer and use anything other than the Tropical Zodiac anymore than you can be a classical musician and play ragas on an electric guitar. These are systems, folks, where the interactions of the whole are paramount, they are not a bunch of little parts that can be broken down and reassembled. The mix and match method of modern astrology strikes me as being like using a Mercedes body, Honda transmission, Chevy engine and wheels from a bicycle. "Boy, in my head I thought this was going to be great!" Learn and respect the systems!
Posted by Christopher Warnock, Esq at 10:21 AM