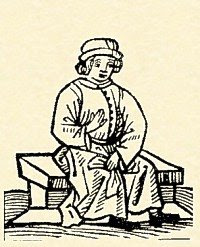 Lilly and other 17th century English astrologers have been the key sources for the 20th and 21st century revival of traditional astrology in great measure because they are available in English, albeit early modern English. We should remember, however, that the 17th century astrologers represent the very tail end of the tradition and were already coming under the influence of "Enlightenment" ie, mechanistic/atheistic thinking.

One of the key tools of mechanistic/atheistic Science is linear, analytical logic which dovetails well with reductionist, analytical thinking. This entails breaking things down to their most basic constituents and then finding invariant relationships between these parts. Chemistry is a good example. You can analyze a rock and find out what chemical compounds it consists of, then what molecules make up the compounds and what atoms make up the molecules. You can then set out the chemical composition of the rock in detail and establish the chemical reactions if the rock were placed in acid.

As useful as this thinking is with regard to some areas, it is not so useful in other areas. In logic you cannot say A = not A, yet how often have we personally been in a situation where we loved and hated someone simultaneously? Traditional astrology is actually quite good at predicting questions of love and in fact, a very typical configuration expressing just this simultaneous love/hate can be found with Venus as the significator of the quesited in a horary in Scorpio, where she is both in detriment and at various times, dignified by triplicity, term and face.

This "points" us toward a frequent cul-de-sac for modern practitioners of traditional astrology, the points system. Older traditional traditional sources do express the essential dignities in terms of points, a planet in sign (+5) in exaltation (+4) in triplicity (+3) in term (+2) in face (+1). Lilly then takes this and expands it dramatically in his 1647 Christian Astrology. At page 115 he lists not only essential dignity points, but essential debility minuses (detriment, fall) and then goes ahead and gives points for accidental dignities and debilities, like being direct, or combust.

My view is that popularity of these point scales comes from the modern prestige of the analytic/reductionist methods of modern atheistic/materialist Science. The nuance of each dignity and debility are eliminated and these conditions are reduced to nothing more than different ways to increase or decrease the planet's strength. Unfortunately, Jupiter being +16 doesn't tell me much, certainly a lot less than Jupiter is rising, combust in Sagittarius. (no, the points don't add up, this is just an example!)

Our older sources and Lilly, too, for that matter, if you can drag yourself away from that darn points table, prefer to express the dignities and debilities in terms of nuance. For example see Bethem's Centiloquim Aphorism 15: A Planet in his House or Exaltation, is as one in his Castle or strong hold. Aphorism 19: Fortunate Planets Retrograde are unfortunate; if Cadent from Angles or their Houses, &c. as one hoping for good, but misses it.

One of the less well known contemporaries of Lilly was William Thrasher who wrote Jubar Astrologicum, The Light of Astrology. Thrasher says in Chapter 17,

"A Planet Retrograde in his own House, denotes to outward appearances, he is a man plentifully endued with the Good of this World, as in time past, and the Person seemeth to be in a very happy condition; but nevertheless, in reality, all things go contrary to him, his Trading decays, and he goeth down the wind. If the Significator go Retrograde out of his House, his state is doubtful, he is in a moving condition.

Each dignity and debility and the combinations of dignities and debilities provide a very subtle, nuanced way to interpret the chart, be it horary, natal, electional or mundane. Reducing everything to a numerical score appeals because it is easy, but also because our cultural conditioning by reductionist Science is so strong. We increase the efficacy and accuracy of our astrological prediction by refusing the siren call of linear logic, while at the same time recognizing philosophically that linear logic is inadequate as a model for significant portions of reality.
Posted by Christopher Warnock, Esq at 10:50 AM