Who is the Real Malefic? 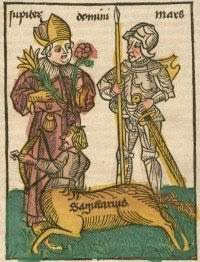 Traditional astrology is sometimes accused of tarring Saturn & Mars as utterly evil planets, while modern sometimes goes to the opposite extreme and reduces Saturn & Mars to "challenges" that with a positive attitude and proper affirmation, can invariably be overcome.

Part of this difference in attitude towards Saturn & Mars comes from the different purposes to which modern and traditional astrology are put. Modern astrology is predominately natal and psychological in approach. It seeks to understand the patterns of the psyche in the chart and offers a therapeutic approach to dealing with psychological problems. Traditional astrology is oriented towards outward concrete events and making precise, accurate prediction regarding these events.

It therefore makes sense for modern astrology to be very optimistic. After all, a therapist is not going to say to a patient, "1/3 of people don't improve with treatment." They want to give every patient the opportunity to benefit from therapy and encourage them as much as possible to be optimistic about their prospects.

Traditional astrology, on the other hand, is seeking to predict events. It therefore needs to be able to quantify indications in the chart, be it horary, natal, electional or mundane, that range all the way from very good to very bad, with all of the shades of gray in between. The essential dignity system (here is more information on the Essential Dignities ) is one way this is done, for as the planets move through the Zodiac their dignity and strength or debility and affliction can be precisely calibrated.

Another very important indicator of often negative events are the malefics, Saturn, the Greater Malefic and Mars, the Lesser Malefic. These are balanced in the traditional system by Jupiter, the Greater Benefic and Venus, the Lesser Benefic. Indeed, the Renaissance sage Marsilio Ficino advises that, "When you fear Saturn, use Jupiter" Three Books on Life, Bk III, ch 7, Kaske & Clarke trans at 275. Saturn rules all sorts of nasty things, for example, Agrippa says that of places Saturn rules, "all stinking places, dark, underground, religious and mournful places, as churchyards, tombs, and houses not inhabited by men, and old, tottering, obscure, dreadful houses, and solitary dens, caves and pits, also fishponds, standing pools, fens" Three Books of Occult Philosophy Bk I, ch. 47.

As much as we might not like stinking dark places, they do exist in reality and thus as everything is ruled by one or planets, even unpleasant things need a ruler and signifier.

Yet we need to keep in mind that the planets in and of themselves are not evil. The 13th century Spanish philosopher Ramon Lull in his Treatise on Astronomy says,

"No sign or planet does evil with respect to its proper quality. This is because it has goodness and because good and evil are contraries. But through accident, according to the dispositions below, the same planet can do good or evil by its proper quality. "

What Lull is alluding to when he mentions the "dispositions below" is the Neoplatonic/Hermetic view that the higher celestial and spiritual realities manifest imperfectly in material things.

This is our opportunity with Saturn and Mars, first to respect their necessary role and second to cleanse ourselves of the imperfections imposed by matter and work with the essence of the planets themselves. The energy of Saturn and Mars can be difficult to take, less pleasant and enjoyable than Venus and Jupiter, but ultimately it may be Venus, who leads astray through pleasure and Jupiter, who leads astray through wealth, who are the true malefics!

More on the Planets in Renaissance Astrology and Saturn and Mars
Posted by Christopher Warnock, Esq at 3:15 PM